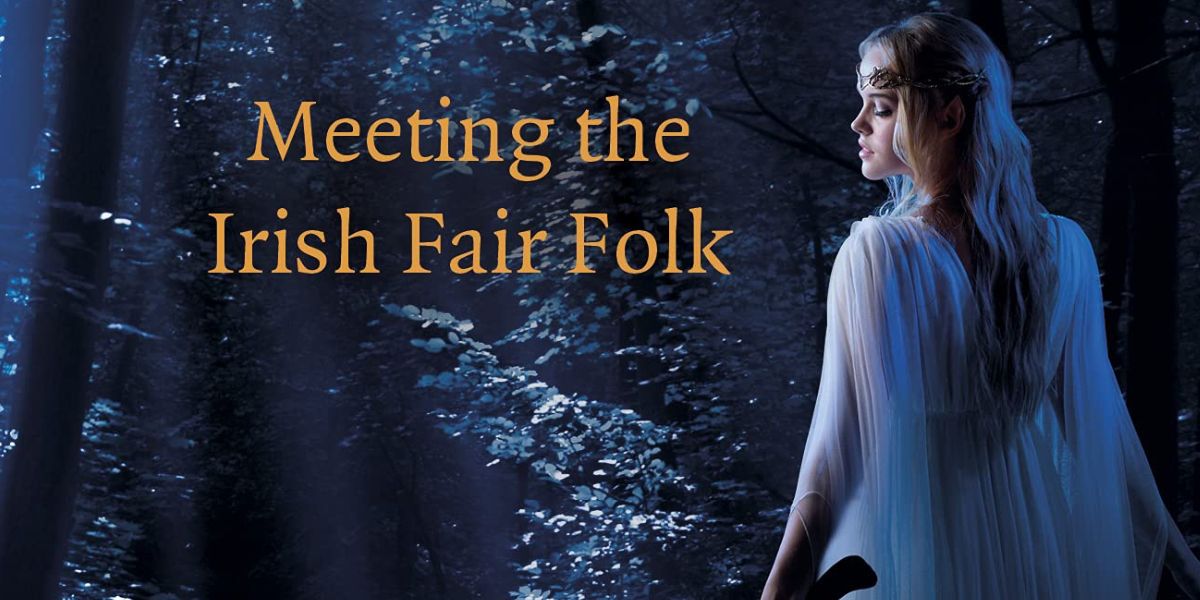 Journeys have not been easy to come by for me this summer. However, although the pandemic kept my physical travel plans on hold, I was able to journey to the Emerald Isle with Morgan Daimler to visit the land of the Fair Folk through the pages of Pagan Portals – Aos Sidhe: Meeting the Irish Fairy Folk of Ireland.

Ireland is one of my favorite places to visit but I do remember being warned not to disturb the places where the fair folk dwelled. I was surprised by this warning as we are living in the 21st century. Did people still believe in the fair folk? This book answered my question with a resounding “Yes!”

In the Author’s Note, Daimler indicates that she is “writing this book because of an aisling, a vision, I had and because I feel like this book is a necessary thing to help people sort out Irish folk belief from pop culture and fiction.”1

Aos Sidhe (pronounced Ace Shee) means “people of the fairy hills” or people of the Otherworld. According to Daimler, “They are the beings who interact with our world but exist in and come from a place that is foreign to our world, and that is the realm of the sidhe, beneath the earth, also called an Saol Eile, the Otherworld.”2 The English term for Aos Sidhe is fairy.

Although short in length, the book is packed with various sources of information on what Morgan refers to throughout as the Good Folk or Fairy Folk which “do not exist within one cohesive grouping.”3

The book is divided into six chapters. Chapter One investigates just who the Aos Sidhe are by looking at folklore and myth. Chapter Two, “Across Belief”, provides sources of accounts with the Fairy Folk, including anecdotes of people who have had experiences with the Aos Sidhe over the last hundred years or so that they have chosen to share.

There are certain times and places, liminal points, where one could have a greater chance of encountering these beings or as Morgan writes “running afoul of the Fair Folk.”4 Samhain, the month of November, and Beltane are the strongest times. Various traditions grew around these times to appease or avoid bothering the Fairy Folk through offerings or ways to protect one’s self from the Fairy Folk. To make matters worse for us humans, the Fairy Folk cannot be seen except by choice, only manifesting in physical form if they so desire.

Chapter Three focuses on Changelings, “a fairy surreptitiously put in the place of a human being.”5 Typically, those taken are infants, young children, newly married adults, and new mothers. They are taken to increase the number of the Fairy Folk, or for entertainment, or on a whim. She recounts four cases from 1826 – 1895 of people who were accused of being changelings and the treatments they suffered at the hands of friends and family, all of which ended in death. To aid in protecting against being taken, iron and Christian holy items were used, such as pinning a safety pin to a baby’s clothing or by the sacrament of Baptism.

Descriptions of the types of Fair Folk are covered in Chapter 4. A few favorites stand out in this chapter for me. Having grown up watching the movie Darby O’Gill and the Little People. I was scared at a young age by the screams of the Bean Sidhe (banshee) in the movie.  This “woman of the fairy hills” is probably one of the best-known of the Fair Folk, as being one who predicts death. I was surprised to learn that there are Cat Sidhe and Dobharchu or water dogs. Other Fairy Folk include Maighdeana Mhara, or “sea maidens” or mermaids, Puce or goblins and sprites, and Ronata, seal folks who the Scottish refer to as Selkies.  The Ronata use seal skins to transform themselves.

Of course, everyone has heard of Leprechauns whose name is thought to come from the Old Irish word, luchorpan which means a very small body6. According to Daimler, there remains debate as to whether Leprechauns are part of the ranking order of Aos Sidhe or are separate, distinct beings.

Chapter 5 is titled “Safe Dealings with the Fairy Folk or Good People” to ensure people responsibly interact with these folks. As Morgan warns:

“Throughout recorded accounts of the Aos Sidhe there have always been humans who have encountered or interacted with these beings, sometimes with good results and sometimes with bad results.”7

She cautions that there are rules to interacting with the Good People in order to promote safety but that there are “real risks of encountering or dealing with these beings.”8 The chapter covers etiquette, offerings, and protections that include things to carry on one’s person in those liminal times (such as salt or a red thread) or hanging an iron horseshoe above one’s door.

Chapter 6 and the Conclusion deal with common misconceptions of the Good Folk. Morgan reminds us that “stories of these beings have been woven into Ireland’s very earth for well over a thousand years.”9 Daimler notes that the book is meant to be an introduction not a tome.

Also included at the end of the book is a much-appreciated Terms and Pronunciation Guide. Though, I would have liked to see this at the beginning of the book, as I spent the entire book mispronouncing the Irish terms.

I highly recommend this book by Daimler, an author with many books on subjects such as Fairies, Brigid, and Irish Paganism to her credit. I learned a lot in reading Pagan Portals – Aos Sidhe: Meeting the Irish Fairy Folk of Ireland, but I have to admit that it left me with an uneasy feeling. I do not want to cross these beings, or inadvertently encounter them. I avoid conjuring them up. I recently resisted the temptation of staring too long at a fairy garden because as Morgan reminds the reader,  the Aos Sidhe are “always leaving but never gone.”10