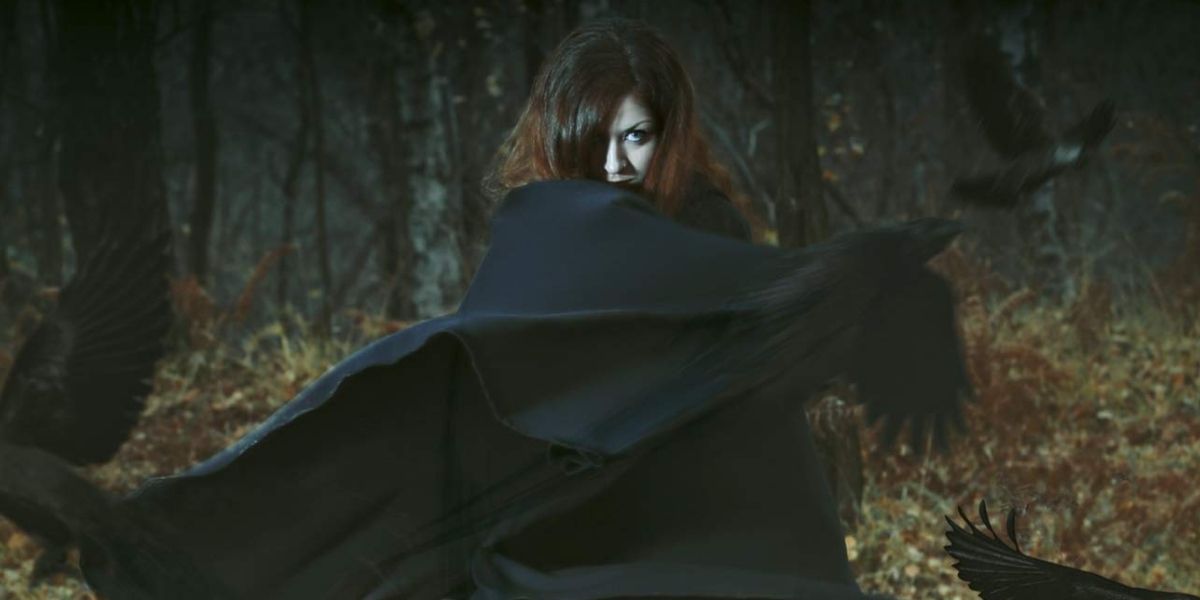 Heavily researched books get a bad reputation for being stuffy, boring, or just too damn long. When something has been researched to the point where it’s just a collection of facts with no soul, that’s where I check out. Fortunately, Raven Goddess: Going Deeper with The Morrigan by Morgan Daimler provides an abundance of thoroughly researched and cross-checked facts, coupled with a flair that only an accomplished storyteller could achieve.

Having authored many books on the subject of the Irish Gods and Ungods, despite not being part of that heritage, Daimler has captured the respect of fellow authors and scholars by their clarity on the subject matter and the depth of their research on the topics. A blogger, poet, teacher, witch, priestess and the author of more than two dozen books, Daimler’s Pagan Portals – Raven Goddess is a shining example of this depth of research as this book takes you beyond the normal space of explaining who The Morrigan is and explores the mystery that surrounds her.

The Morrigan has been misrepresented in many books, mostly due to the rapid spread of misinformation through opinion-based writings. I am not in any way suggesting that people may not have an opinion on how they identify or interact with any particular God or Goddess, but I do believe having the facts should precede any sort of opinion-based writing. Having said that, while Daimler does inject their own opinion on a regular basis throughout the book, it’s done in a simple and satisfying way that adds layers to the information being presented.

The opinions expressed by Daimler are based on their exhaustive research and their ability to translate the old texts that are referred to throughout the book. Having tried learning Gaelic exactly once in my life, it is impressive to see the original text plus the various translations already made compared to Daimler’s translations. This added touch lends a layer of authenticity to the book that is both refreshing and downright amazing.

Referencing old texts, parts of poems, and scholarly writings, Daimler is able to piece together a very deep and revealing portrait of who The Morrigan is and how we can work with Her as individuals if we feel called to. Beyond the normal listing of various correspondences, Daimler provides an in-depth examination of various sources of the material from which the correspondences associated with The Morrigan are derived. This cross referencing could be tiresome for folks if it weren’t for the way Daimler writes.

In one chapter, Daimler provides irrefutable proof that Morgen Le Fay and The Morrigan are two separate entities. They explain:

“The Morrigan and Morgen Le Fay are often associated with each other in modern paganism… both certainly were vilified and demonized over time as stories evolved, the Morrigan going from a goddess to a night spectre and Morgen from a priestess of Avalon to an incestuous and usurping sister of the king.”1

That is perhaps one the most common misperceptions of The Morrigan that I have personally come across. I didn’t think that the two shared any roots, but over the years as I did my own reading and found others who made connections, it made me wonder. The biggest point of contention is the fact that the Morrigan is Irish and Morgen La Fay is Welsh, so that should have stopped the connection there. Fortunately, this book cleared all that up as Daimler says without reservation, “there’s no evidence that the Morrigan and Morgen La Fay share any roots or that historically the two have any connection to each other..”2

There are other pieces to the book that enhance the journey through the history of The Morrigan. The correct spelling of her name, for example, as well as an explanation of why it is “The Morrigan” and not simply “Morrigan”. Daimler goes into this briefly, stating “It may help to keep in mind that her name translates to a title — either the Great Queen or the Phantom Queen, so try thinking that you are saying that.”3

References to other works abound, if you aren’t careful you will fall down a rabbit hole of personal research and cross checking. As I write this, I have four other books on the subject including Daimler’s first book on The Morrigan titled “The Morrigan: Meeting the Great Queens”. I love reading books that give you additional resources to look up your own information and this book does that perfectly. Daimler’s writing is clear and concise and carries a hint of reverence for the subject matter. This book is an absolute pleasure to read and conjures up many questions that no doubt I will spend time finding my own answers to.

For me, as someone who follows The Morrigan and has for years, this book provides a wealth of knowledge that I didn’t have and more importantly, didn’t know I was missing. Yes, it’s scholarly and a bit repetitive at times, as Daimler is constantly drawing upon their vast knowledge of Irish paganism in order to provide clarity around the Morrigan, her associations or correspondences, and her activities, but still Pagan Portals – Raven Goddess is perfect for those wishing to dive a bit deeper into the lore behind The Morrigan in order to deepen their understanding of her and strengthen their own connection to her.