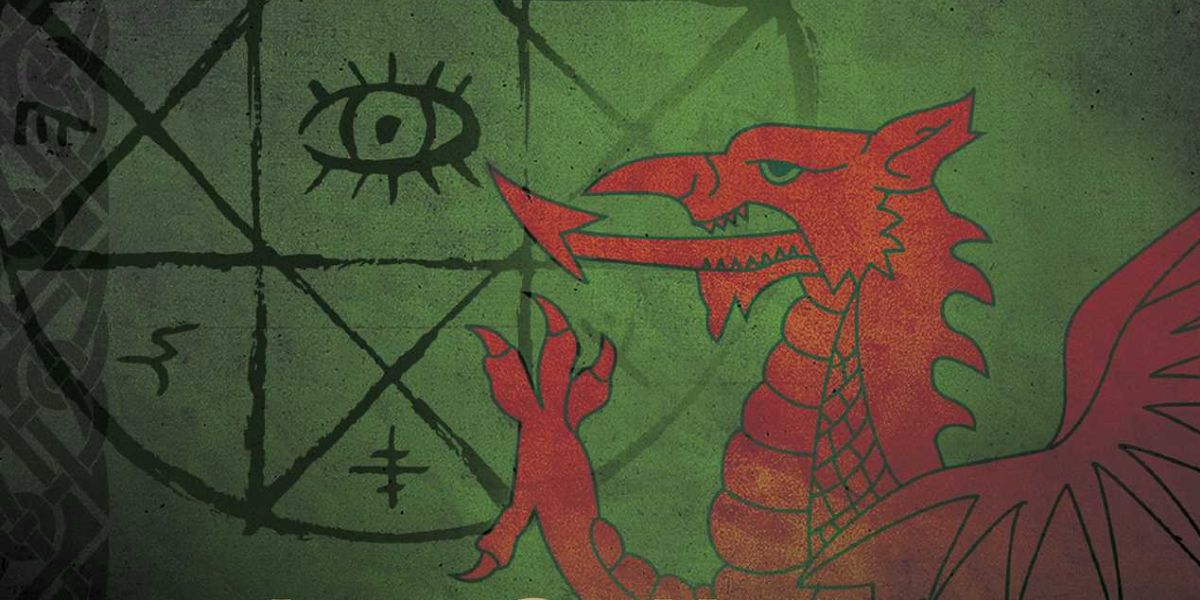 Seeking to explore and bring to light the “treasure trove of untapped information relating to the ancient Druids and arcane witchcraft that evolved in the Welsh Marches”1 while incorporating the current practices in this area, Hughes and Gallagher looked at artifacts, texts, museum archives, and even the natural landscape. They soon discovered that there were more similarities than differences in the practices of the Druids and the witches. The book delves into regional practices such as sin eaters and eye biters and even includes the area’s influence on the writing of J. R. R. Tolkein.

Accompanying photographs of artifacts, sites, and buildings bring to life the artifacts and markings of these people. The most widespread witch marks found in the area’s buildings are of taper burns, intentional in their making and not by the random flicker of a flame too close to a wall. Photographs of items such as a curse doll, a wooden witch’s coffin curse, and protective amulets and devices found in walls and floorboards, illustrate the influence of the witches and Druids in this region.

“People have secretly hidden objects in their houses for centuries (things like bottles, shoes, and bodies of cats) to protect themselves and their families from various forms of supernatural menace (evil spirits, witches, hostile magic, malign influences) to influence events or to take revenge on people that have wronged them.”2

The work is comprehensive in its exploration of the significance of the earth-based practices of the Druids and witches in the Welsh Marches. The Druids have lived in this area for over 6,000 years, from around 3,800 B.C. The region, of course, experienced tumult since the first ancient people arrived there. The book also details encounters of these people with the Romans in their first invasion, with reminders that the Romans were also pagan until 313 A.D.

Historical references put things into context. I was particularly struck by the reading about the Walton Basin, on the Welsh side of the border, which archeologists believe was a national ceremonial center. A timber henge, approximately 328 feet in diameter, was discovered that is felt to be a prototype for a stone henge that was not built. There were similarities between the deposits found at this site and Stonehenge.

Tolkein enters the picture in Lydney Park, Gloucestershire, England, where he joined British archeologist, Sir Mortimer Wheeler, at Dwarf’s Hill in the late 1920s. Dwarf’s Hill contained a labyrinth of tunnels and was thought to be the home of little people. A tablet bearing a curse was also found. Silvianus, a Roman, had lost a ring and cursed all who bore the name of Senicianus, the supposed thief.

Wheeler invited Tolkein to examine the site of Noden’s Temple at Dwarf’s Hill after which Tolkein contributed to a report on the origin of the name, Noden. When Tolkein later wrote The Hobbit “it became impossible not to speculate upon the connection between his experiences at Lydney and his epic tales of Middle Earth,“3 including Hobbits and a ring.

The book provides simply fascinating information and insight. Sin eaters and eye biters….oh, my. Sin eaters were unique to the Welsh culture and the region of the Welsh Marches. The sin eater (always male) took upon himself the sins of the newly deceased so that the departed could find his/her place in the hereafter. A sin eater was retained by the family of the deceased and would consume a cake called a dead cake which had been placed on the breast of the corpse at sunset. It would remain there until sunrise the following morning where it was thought to absorb the sins of the departed. The sin eater would then consume the cake along with ale.

Eye biters were found among the powerful witches of the Welsh Marches who were thought to have the ability to cast evil curses simply by looking at their victims. Their gaze was as effective as if they were to “bite the jugular vein (of the victim) and watch them bleed to death.”4 Beware the brathwyr llygaid, or eye biters!

As a reference, the book provides a comprehensive list of five prominent occultists (alchemists, astrologers, and occult philosophers) who “influenced the kings and emperors of much of Europe and beyond.”5 These men, while famous, reflect the many unknown practitioners, who live/lived in the Welsh Marches:

“There is little doubt that the unique and extraordinary culture of the Welsh Marches has had a lasting influence upon the history of the occult within the Marches itself and further afield around the globe.”6

Hughes and Gallagher remind the reader that the lore of the Druids and witches was an oral tradition. They bring the reader into the modern era of witches and Druids. “A Druid is a learned pagan, well versed in the oral tradition of paganism and the role of the Druid as a teacher and spiritual leader within it.”7 Like the Druids, witches maintain an ancient understanding of natural magic. The authors write extensively about Neo-Paganism in its many forms.

The book is divided into two sections. The first section, “Witchcraft and Druidic Lore of the Welsh Marches” focuses on all that was written about above. The second section, “Grimore of the Welsh Marches (Yr Llyfr Swynion Gororau Cymru)” opens the reader to the book of spells of the Welsh Borderland. It is a valuable companion to the first part of the book and allows the reader to investigate this natural magic. “While this grimoire is the result of a detailed comparison of witchcraft practices and Druidic lore, it must not be considered an erroneous conflation of the two traditions.”8

There is information on preparing the work space and crafting components, casting a circle, use of botanicals, invocations, protection against malevolent energies, amulets, talismans, and charms.

Also introduced are witch marks (burn marks), various types of spells, the casting and lifting of spells and curses, the use of wands and the crafting of wands, working with waters and oils, creating poppers (a small doll representing the recipient of a curse). I particularly liked (and was relieved) that the second section of the book ended with elixirs of love. As the authors remind, “in the case of inanimate objects they of course have a material manifestation and are also imbued with a communal spirit; however, they do not have a personal spirit that all living things receive at conception.”10

Overall, Witches, Druids, and Sin Eaters is a very comprehensive look at this unique area of the world, one with a long and deep history of Druids and witches. I highly recommend it if you are looking for a deep dive into this all-important region, particularly if you feel drawn to the aforementioned spiritual paths of Druidry or Witchcraft. There’s so much valuable history revealed in this book that is sure to expand your background knowledge, particularly the impact these lands have had on writers such as Tolkien and those dedicated to exploring the mysteries, such as alchemists, astrologers, and occult philosophers.