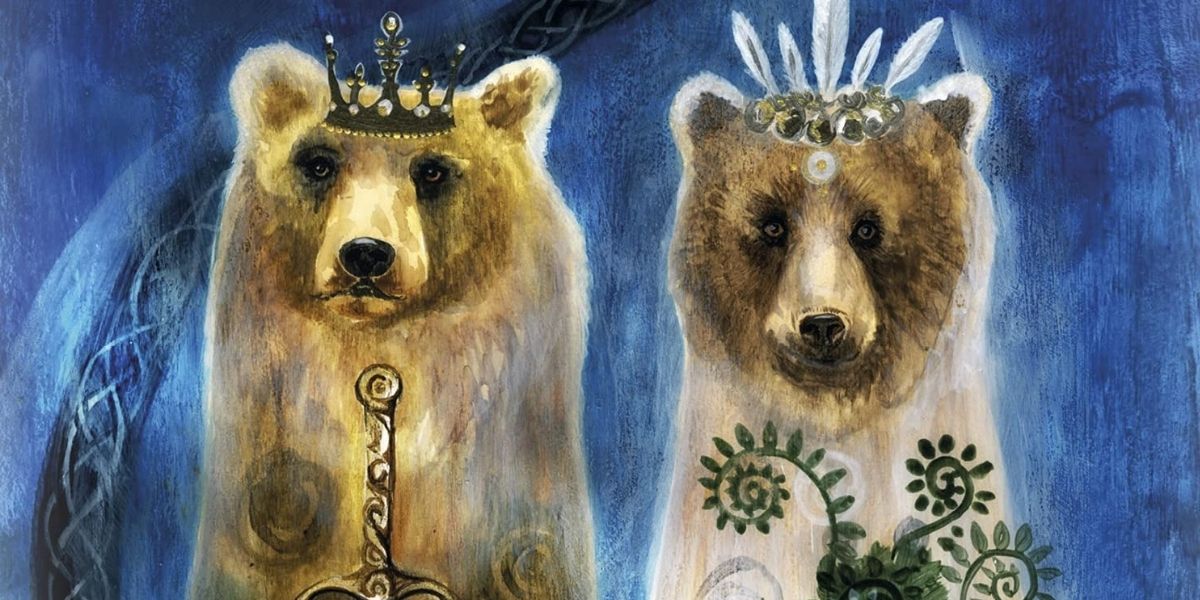 Artio and Artaois, by Andrew Anderson

When I picked up Pagan Portals – Artio and Artaois: A Journey Toward the Celtic Bear Gods by Andrew Anderson, I really had no idea what the book would be like. This was my first time reading a book from the Pagan Portals series, so I didn’t know what I’d find inside. Mythology, spirituality, anthropology, history? It turns out this new book in this series hits all of those at once!

Anderson invites the reader to ride along on his intriguing journey to discover the identity and importance of this pair of Celtic bear deities. This pilgrimage begins as an investigation of a protective ursine spirit guarding his home and ends with the conclusion that this divine duo may be some of the eldest deities worshipped by mankind!

Anderson’s journey begins with a synchronicity: seeing Artio’s name and image in a social media post. This became significant soon after, when Anderson sent out a general plea for a higher power to help protect his home. He saw a vision of a great, spectral she-bear (later identified as Artio) standing guard above his house. Spurred by this spectacular manifestation, Anderson felt an immediate connection to this deity and decided to begin a pilgrimage of discovery to learn more about Her.

Initial research revealed precious little about the she-bear goddess, but Anderson followed the bear’s historical pawprints into mainland Europe: from Luxembourg to Germany to Switzerland. In Bern, Anderson found the most compelling piece of evidence: a sculpture dedicated to Artio amid a town with a long – and still-standing tradition of venerating bears. It was here where Anderson really begins to put the pieces together, using keen observation and insight to bring this investigation to life for the reader. His evocative description of Artio’s sculpture and meditation on the bear’s presence and energy drew me right in, as if personally introducing me to the goddess.

Anderson does brilliant work of incorporating research from other scholars into his discussion, but also uses their ideas as launching points for his own, perceptive insights about Artio. Regarding the sculpture in Bern – which includes not only the bear, but a tree and a woman holding a basket of fruit as well – he disagrees with many scholars that the tree is merely a symbol of the bear’s forest habitat. Anderson argues instead the tree has a deeper significance: there is a connection between it and the she-bear as symbols of rebirth. He writes:

“The tree is very stylized, not identifiable as any particular genus of tree and seems to have a somewhat phallic acorn pointing over the bear’s back. . . taken together, the bear, the human, the fruit and the tree present a powerful image of rebirth and plenty, a dedication to an extremely powerful protective mother. . .”1

One of the most surprising and fascinating sections of the book comes from mythological connections that Anderson investigates, particularly with regard to Artaois, Artio’s masculine counterpart. Continuing to trace the history of bear imagery into the United Kingdom, Anderson’s research suggests that past rulers associated themselves with bears in order to stylize themselves after the legendary King Arthur. Indeed, the characterization of Artaois seems to share many similarities with the great king: a protector of his people, a mighty warrior, and a craftsman. Even the linguistic connection between ‘Arthur’ and ‘artos,’ the Welsh root for “bear,” makes one think it’s quite likely that the spirit of Arthur has its root in the divine nature of the bear god.

I absolutely love this weaving of the spiritual and mythic worlds that Anderson presents. Although the question is left open as to how much the worship of Artaois influenced the tales of King Arthur – and Anderson thinks we should definitely not just conflate the two – the question itself invited me into the realm of archetypal thinking. I found myself engaged with questions of how our ancestors might have migrated over time from worshipping these ursine gods to idealizing a human figure, as both represent the positive qualities we desire from the masculine side of a great ruler.

These thoughts flowed right into the next chapter of the book, where Anderson takes what he has learned about Artio and Artaois and begins to search many other cultures of the world for the significance of bears. I was shocked to learn that bear worship – or, at the very least, sacred respect for these creatures – is among the most ancient forms of human reverence. Artio, the she-bear, may indeed be one of the most primordial representations of the Great Mother!

In the final chapters of the book, Anderson finds that even bears in popular media: such as the film, Brave, and the video game, Smite. I loved his inclusion of the contemporary media portrayal of bears, as it is very enticing for me to now go and look at these sources with fresh eyes, paying attention to how they capture the spirit of these ancient bear deities. And for those interested in taking up a spiritual practice focused on bears, Anderson provides several suggestions for creating your own rituals – including the ancient rite of the Bear Feast!

I highly recommend Artio and Artaois to anyone wishing to learn more about bears – not only the animals themselves, but also the relationship that humankind has had to these creatures throughout our history and beyond. It’s also important to note that bear populations have vastly declined in recent centuries, especially due to habitat destruction for human expansion. Throughout the book, Anderson firmly encourages the reader to consider our connection with these magnificent creatures so that we might help to restore them to a place of high honor and treat them with the reverence that our ancestors had once offered.