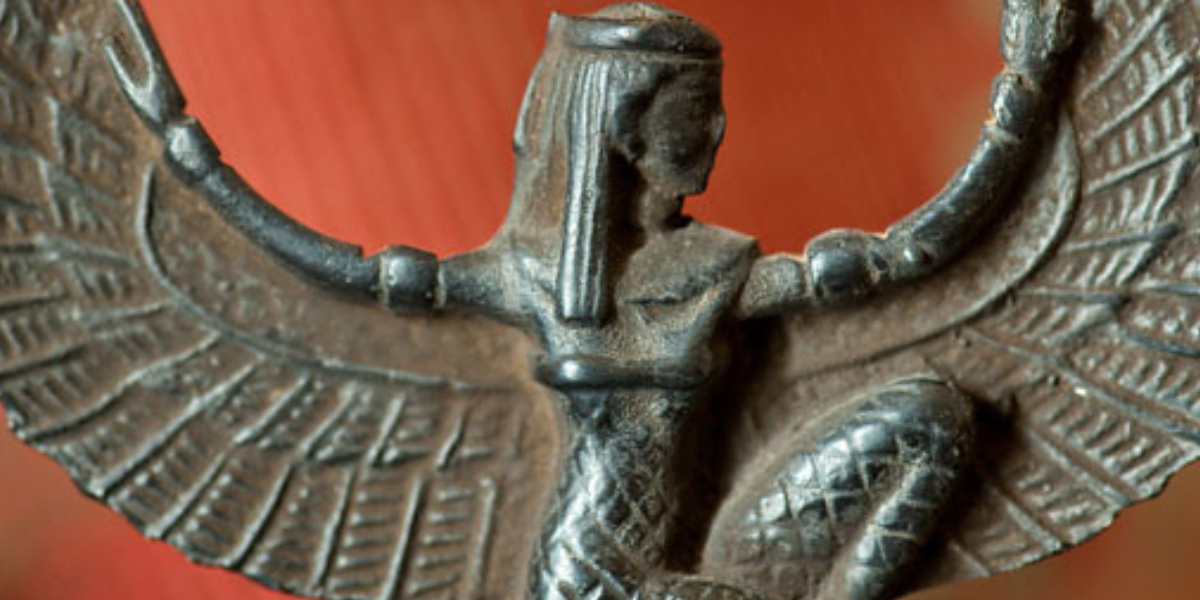 Becoming a Garment of Isis, by Naomi Ozaneic

“What passes for an ancient Egyptian religion and is often described as such is within the temple tradition, theurgy, the divine work of being and becoming. This is essentially a mystical endeavor quite unlike modern religion.”1

Becoming a Garment of Isis: A Nine-Stage Initiatory Path of Egyptian Spirituality by Naomi Ozaneic is one of those rare reads that emanates its energy and power simply by the calling of its title and the first few words on introduction offered. When you encounter a title of that sort, the reader knows that this will be an extraordinary read with much that is held between the words on the page and how these resonate within the consciousness of the reader by way of inner transformation.

The book begins with “Preface: Preliminary Thoughts” that speaks to the evolution of its title and includes a powerful retelling of the author’s calling by Isis to take up Her mantle of heart and illumination to better serve the world’s needs in these modern times…

“Do you hear my voice? Do you rise upon a new path? Do you desire to be among my service with all the powers of your heart? Do you turn to me with outstretched hands as a child reaches out to a mother? Do you know the love of my heart? Then come. I am not distant but nearby. I am not locked in the past but I am ever present. I am as close as your next breath.”2

“Introduction: Kemetic Sacred Science” provides the reader with context and a thorough foundation of the Kemetic philosophies and application as a very specific mindset inclusive of science, religion and art…

“The Kemetic Sacred Science is an initiatory schema not a faith, it is a gnosis not a belief, it is a technology of consciousness not a religion. Its conceptual foundation is in a cosmology and theology that embraced all of nature from stone to star as a living presence mediated through a hierarchy stretching from the Above to the Below and completing in the human person as an embodiment of the divine.”3

The rest of the book is separated into four parts and takes the reader through the minds of the heart, spirit, and soul. As the reader moves through the heart of its content the incorporation of magical practice is evident in every aspect of this title and none more so than in the way in which it is organized beyond the preface and introduction. Ozaneic makes use of the enneagram and the number nine that corresponds to its structure in the crafting of nine sections of praxis designed to encourage the application of its content.

“Nine is the highest digit. It symbolizes comprehensiveness and culmination. The enneagram is a fusion. It’s used for the pursuit of knowledge and in the quest for cosmic deities.4

The first three parts each contain three praxis sections (for the total of nine) and are entitled “Temenos I: The Heartmind”, “Temenos II: The Spiritmind”, and “Temenos III: The Soulmind”. I was intrigued by the use of the word “Temenos” and looked at the definitions given, all of which are telling in the creation of another layer of magic that holds the words of each section as sacred sanctuaries where the reader may explore and step into the power of their Divine nature.

Of note in “(Part 1) Temenos I: The Heartmind” are the Twelve Attitudes of Mind for Spiritual Intelligence, which are part of Praxis 1: The Power of Intelligence.  These key attitudes are taken from the book Spiritual Intelligence by Dana Zohar and Ian Marshall and form the “SQ” or Soul’s Intelligence, an integral concept in the ancient Egyptian’s life’s purpose. These twelve keys encourage the reader to cultivate self-awareness, vision, resiliency, compassion, a diverse mindset, curiosity and humility to name a few. The inclusion of the keys by Ozanaeic offers the reader another path to explore as the Kemetic principles and worldview become interwoven with modern practices of spiritual awakening.

The concluding section, “Part IV: the Star of Mysteries”, refers to the nine-pointed star and each of the praxis sections that have carried the reader to the door of becoming and initiation in the ways of the Goddess, Isis and Egyptian cosmology and spirituality. In the same way that the preface shared the author’s experience in being called to writing this title, the concluding sections provide a detailed recounting of Ozaneic’s experience of embodying the Goddess Isis for her own workings as well as in attendance at the “Parliament of the Worlds”, a multifaith convention that brings together some of the most revered spiritual leaders of the world.

This chapter is an invitation to the reader to give consideration to the service and greater work of offering oneself up to devotion and expression of the ancient Kemetic ways. And, in the sharing of the author’s journey on that path, the reality of such a commitment is presented in a way that maintains the power of self-awareness and accountability and the evolution of spirit through sacrifice and service.

This whole book is rich in history, theory, practical application and a concluding chapter “Guidance” that offers the reader a contemplative practice to deepen the work of the material offered by each praxis. I found these to prove that powerful contemplatives do not have to be lengthy and filled with unnecessary verbiage to affect the synthesis and change desired.  It is a dense read, as should be any title that takes on the task of reaching out to the most ancient of deities. Its writing is infused with the devotion and illumination of Ozaneic and, thus, exemplifies the gifts and challenges of pledging spiritual service to the Egyptian goddess, Isis.

The primary take-away from this title is the comfort (or perhaps for some fear) that although many feel far removed from the unity and cosmological understanding of the Egyptian culture and their divine Neter (Gods/Goddesses) there is a re-awakening of the need for their universal connections. The cycles of time and events have merged and interwoven with similar events that caused the downfall and laying aside of the truths held in the Ancient Civilizations.

Becoming a Garment of Isis is a reminder that there is much value to be had in connecting to some of the elder philosophies, calling out to the Deities that held the understanding of creation within their forms and living in accord with the natural order of the world(s) and humanity’s place within it.

“My journey into the Kemetic landscape has been a personal revelation; all journeys bring discoveries and this has been no exception. I have seen the abyss in perspective between this ancient view of life and our own. Silenced by an inability to read any symbolic language and made unconscious by glittering consumer distractions, we stand deaf, dumb and blind in a world singing to us clothed in the raiment of glory and inviting us to engage and enter into partnership.”7