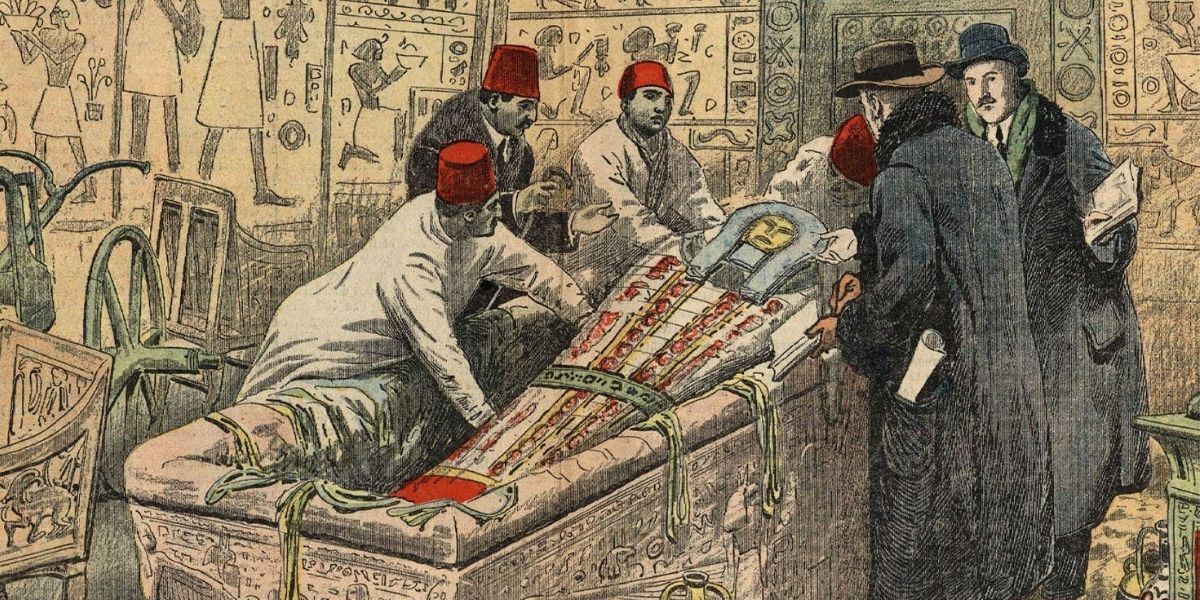 Confessions of an Egyptologist, by Erich von Daniken

Doesn’t it sometimes seem like Egypt holds all the secrets to the Universe? It’s easy to get lost in the ancient history of such a vast, expansive empire. I had previously read Erich von Daniken’s book Chariots of the Gods, and was curious what other hidden history might be revealed in Confessions of an Egyptologist: Lost Libraries, Vanished Labyrinths, & the Astonishing Truth Under the Saqqara Pyramids.

The book starts off with a very violent act of terrorism, but this sets the stage for the story of Adel H. to unfold, who was tragically murdered in the rampage. When the company Adel was working for needed a guide for von Daniken’s group, Adel volunteered, despite von Daniken’s notoriety for asserting his own information. Adel had read von Daniken’s work and was eager to have the opportunity to speak with him, sparking a decade-long friendship.

Throughout their relationship, Adel shares tons of insider information, having come from a family of grave robbers, with von Daniken. Confession of an Egyptologist‘s  primary focus is on one particular experience that Adel had in the Saqqara Pyramids, which changed his life forever and reveals fascinating information about what might still be hidden beneath the pyramids.

“And I could help but wonder under which deserts, settlements, or sanctuaries these labyrinths must be hidden. Where were these lost, underground worlds from distant times? Had they been excavated and then covered up again? If so, by whom? Had these long-forgotten structures become inaccessible due to natural disasters?

And where are the millions of books that were written in the distant past? Were they burned? Damaged? Deliberately destroyed? And if so, again, why? Is the little that we see today all that there is? Or do secret libraries exist, accessible only to hooded guards or members of obscured orders? Who actually had an interest in writing, hoarding, and then hiding books for millenia? Who wanted to make these books disappear again?”1

Suddenly, I became curious about these questions, right along with von Daniken, and this made me eager to continue reading. It is of von Daniken’s opinion that the Egyptians hid these books because they feared a flood. However, humanity has also proven to be just as destructive of knowledge, from Caesar trying to burn down the Great Library of Alexandria to Pope Gregory IX burning Jewish books in the Talmud burning. (For more on the topic of book burning, I highly recommend Burning the Books: A History of the Deliberate Destruction of Knowledge by Richard Ovenden, which I’ve been reading this week too.)

As the different theories of why books would be hidden and where they might be, different theories come up between Adel and von Daniken based on their cumulative knowledge. One that was especially interesting was the concept of books being inscribed in precious stones hidden in the artwork on the underground walls. Von Daniken brought up the ancient text The Life of Adam and Eve, which describes how Adam learned how to communicate with a sapphire stone and learned all about astronomy and the earthly calendar.2 Adel had his own experience related to this:

“I saw a sculpture of the goddess Hathor carved into the wall in addition to the strange, tubular objects I described before. Between her eyes, in the middle of her forehead, was something like a precious stone. I clearly remember the indescribable awe I felt that prevented me from prying out the stone.”3

Is it possible that precious stones can communicate knowledge spanning millennia? If so, this would point to an advanced technology of the Egyptians, which might be hard to explain for some, but not for von Daniken. He asserts time is relative, and in both the past and present Earth has had visitors from the skies. Citing multiple witnesses of UFOs, von Dankien ultimately concludes the extraterrestrial intelligence that has come before is now present again on earth.

To be honest, this felt like a stretch to me, but it was an intriguing concept nevertheless. I just wish it had been substantiated a little better than the assortment of testimonies von Daniken put together, leading to a kind of smorgasbord of ideas trying to pass as a credible theory. So while I wasn’t sold on the ultimately conclusion about alien life present on Earth, I did enjoy another focus of the book: the search for historical labyrinths and the experience Adel confided in von Daniken.

Before proceeding to discuss my thoughts on that content, it’s worth noting that the greatest flaw in the book is the lack of organization and skipping from one subject to the next without any clarity about how they are related. It feels like there could be some loose, easily broken thread connecting the different topics covered, but the book lacked a strong thesis, which made it hard for me to follow along with how one part of the book led to another. It felt like a mis-mash of information, which is often what makes me dubious of the veracity of the content.

As mentioned, the highlight of the book was Adel’s personal story of being stuck in the underground labyrinth of the Saqqara pyramids. While accompanying his father and uncle in a grave robbing expedition, he ended up getting stuck in the pyramid when a rock blocked his path back out.

Noticing a stairway that led downward led to mystical experience for him, filled with intimate relationships with a beautiful young woman and discovery of a mechanical throne, possibly linked to King Solomon’s. He was able to survive and escape with the help of a falcon that guided him to an exit. This is a quick summary, and his experience is recounted in much more detail by von Daniken, but it sounds incredible. It makes one wonder about what’s hidden in the unexplored tunnels underneath the pyramids.

Overall, I got some entertainment from reading Confessions of an Egyptologist. It was interesting to imagine the scenery and experiences of Adel, and I did learn some new information about Egypt from von Daniken. Just like many “conspiracy theory”-esque or outlandish ideas, the book has enough factual information to make it seem plausible, but it is simultaneously riddled with loopholes of confusion and inconsistency. So while I am not full subscribing to the tenets of the book, I am at least glad that I read it for consideration.