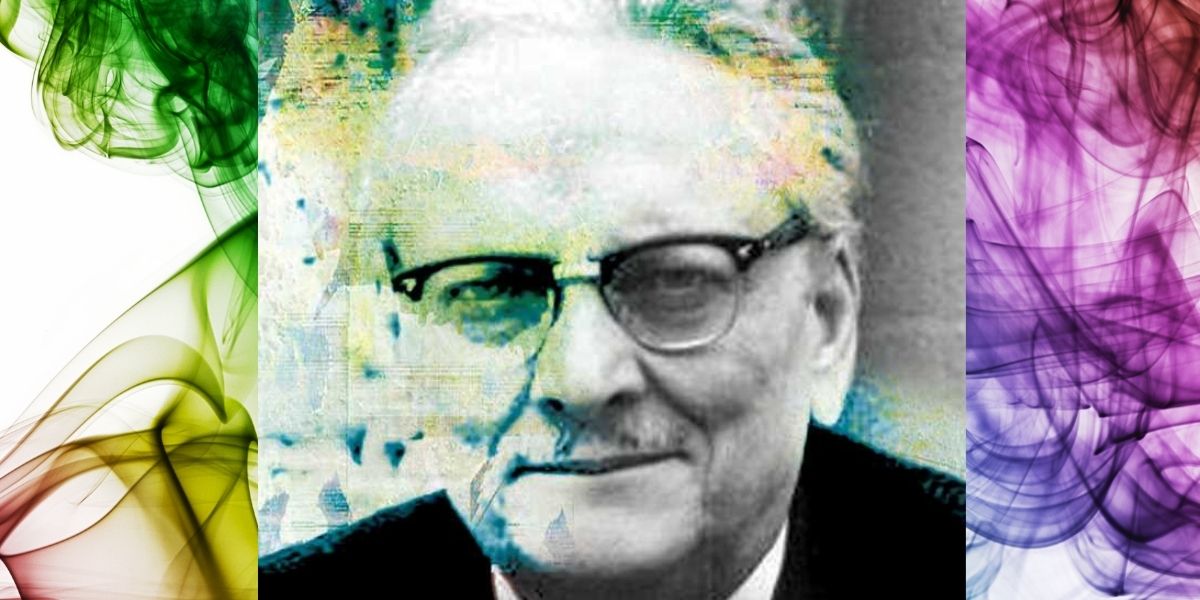 I have quite the collection of Manly P. Hall books, which I have amassed because I live about two hours outside of LA and can score incredible finds at used book stores. From The Secret Teaching of All Ages to Man: Grand Symbols of the Mysteries, Hall’s books are what I am most proud to display on my bookshelf.

While recently I’ve been reading Hall’s The Secret Destiny of America to better understand the USA’s Pluto return this year, I will admit the aforementioned books haven’t been delved too far into yet. Most of the time, I’m intimidated by the sheer amount of history, knowledge, and occult wisdom stored in the books and feel like they’re not relics rather than learning manuals. I refer to them in dribs and drabs, taking what I need and then quickly shutting it again, almost afraid to unleash the power.

However, reading Making the Ordinary Extraordinary: My Seven Years in Occult Los Angeles with Manly Palmer Hall by Tamra Lucid has completely changed my perception of Hall – in a very good way! Lucid has painted a new picture of Hall for me, granting unique access into his life that reveals so much about his final years.

I love reading fiction books about people in history that I admire. Learning about their personality, daily life, and close association always puts their achievements in perspective for me. It’s easy to deify those we admire, but remembering they are an ordinary person helps to better understand their motivation behind their success.

Lucid and her boyfriend Ronnie, a troubled yet insightful man determined to make some changes in life, discovered The Secret Teaching of All Ages in the early 1980s. The content was life-changing, and they were surprised to find out the author, Hall, was not only still alive but gave talks regularly every Sunday morning. For over 50 years, every Sunday at 11am, Hall would give a lecture at his Philosophical Research Society (PRS) headquarters on various topics. Curious about the content of the book, Lucid and Ronnie decided to attend one.

Ronnie experienced a life-changing moment where it felt as though Hall was speaking directly to him, which many people in Hall’s life claim he had an uncanny way of doing. Following the lecture, Ronnie was eager to make a contribution to PRS, so he and Lucid decided to volunteer.

Ronnie wasn’t sure what he could contribute and was plagued by self doubt. Therefore, when Hall picked Ronnie to edit the bibliography of his alchemical books, he was honored yet doubtful he could fulfill the role. In fact, he told Hall no at first, but Hall insisted. And just like that, Lucid and Ronnie became a part of Hall’s inner circle, ushering in a whole host of characters in their lives.

There were tons of regulars at PRS; each there for their own reasons and the atmosphere was very open to ideas, research, and general philosophical questioning of the Universe. People from all walks of life from gurus to musicians gathered around the hall, making PRS an eclectic, thriving community.

Lucid describes Edith, a hip old woman that taught the couple astrology,  musicians Arthur and Lynn who called their home “New Temple of Freedom”1, Mr. Louis, who’d visit their house and go silently meditate in the corner, and many more! Reading about the variety of people, each on their own spiritual quest, coming together through the PRS community made me see how a sense of belonging can help one to flourish.

And this question of, “What brought you here?” is something that Lucid explores throughout the book for everyone she writes about. This makes the book interesting that she’s not merely just describing people, places, and events; she’s painting a picture of this time period, capturing the atmosphere and highlighting the deeper motivations and personal journey of everyone she writes about.

“We asked Steven what brought him to PRS. A dream. Dreams had been guiding him on an epic journey to gather information from all around the world about alternative and unusual methods of healing involving color, electricity, herbs, elixirs, the recipes of medieval sages like Paracelsus, and the advice of psychics like Edgar Cayce.”2

Meanwhile, Lucid and Ronnie are on their own spiritual journey. For instance, they begin visiting the Seer of the Sunbelt, Reverend Edward A. Monroe, “who would be answering questions about earth change.”3 through his Scottish spirit guide Jock. Another time, Ronnie was having trouble overcoming an illness, so Hall took him to Dr. Sabia to have a session with The Electro Stimulating Machine.

If you try to Google these things, no information comes up. And this is why Making the Ordinary Extraordinary is such a value book for one’s occult collection. There’s little to no records of these things that were happening. And reading about them opens so many doors of perception, as well as topics of research to further inquire about. When you consider this was all happening pre-Internet, you begin to see how unique of a scene this must have been. Reading Lucid’s story helps me to understand what occult Los Angeles was like in the 1980s, and oh how I wish I had been there!

In time, Ronnie began rising in rank at PRS, even delivering his own lectures on Sundays. There’s a really, kind of crazy story too at how Lucid and Ronnie wound up married because of the Halls, with Manly P. Hall as the officiant! Quite abruptly though, Hall subtly forced Lucid and Ronnie out of the PRS community. Things were changing, and Hall knew it.

What ended up happening to the community PRS, splintering and fracturing, was a heartbreaking story. For some reason, even with the great admiration and reverence I have for Manly P. Hall, I had never heard about the sketchy circumstances of his death. Lucid’s experience of leaving PRS and even warning Hall about the people he was surrounding himself with absolutely cast his death in a new light for me.

Hall did at least guide Lucid and Ronnie to this next endeavor: music. Their band Lucid Nation rocks. I totally went and listened to their music after I finished the book. Plus, I was inspired to check out all of Lucid’s other work including writing for Newtopia Magazine and documentaries Exile Nation: The Plastic People, End of the Line: The Women of Standing Rock, and Viva Cuba Libre: Rap is War. Totally, totally amazing stuff!

But there’s just one more person I have to write about, which I saved for last intentionally because she’s been all I’ve wanted to talk about: Marie Bauer Hall. Lucid delves into Marie’s fascinating theory that Sir Francis Bacon (and his contemporaries) was Shakespeare, detailing how she went to the Burton Church in Virginia to try to dig up his tomb. Marie’s cosmology also involved the Space Mother.

Lucid describes how “In her magnum opus, Inquiry Into the Nature of Space and of Life in Space, Marie expressed optimism that it would be the mother of humanity whose conscience and consciousness would first awaken.”4 I’ve gotten so into researching more about Marie that I even bought God as Mother by Victoria Jennings, who organized and shares Marie’s work in the book. I really hope that more occult historians focus on Marie, from her life as Manly’s wife for decades to her own cosmologies – there is so much to uncover! A real treat is that Lucid includes the recipe for Marie’s zucchini pancakes at the end of the book!

All in all, Making the Ordinary Extraordinary is a must-read for anyone interested in occult history. Manly P. Hall is one of the most well-known modern occultists of our times, and Lucid’s up close and personal stories of working for Hall and being immersed in the PRS is fascinating insider information. Lucid does a wonderful job of sharing her personal experience with objectivity and genuine insight and reflection about the past. While it focuses on time-passed, it opened so many new doors for me to explore going forward; occult Los Angeles lives on through Lucid and Making the Ordinary Extraordinary.