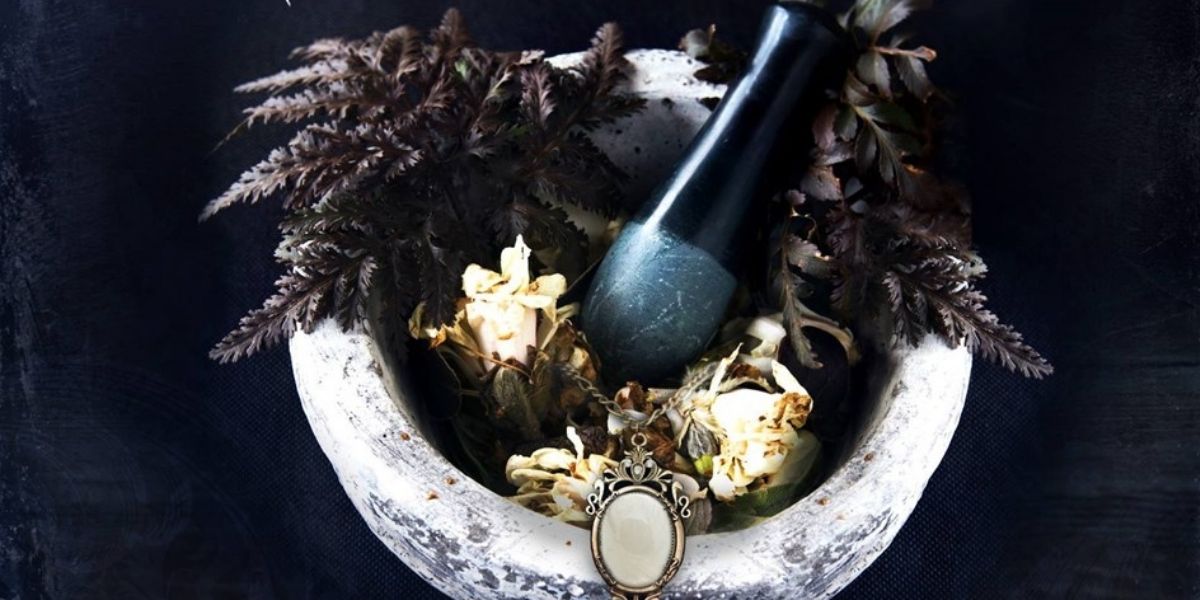 The Age of Witches, by Louisa Morgan

Horses, poppets, and duels within a family of witches? Add a splash of romance and you’re got the magical ingredients for The Ages of Witches by Louisa Morgan. This is a definite must-read for witchcraft-fiction readers. Featuring strong women protagonists and actual occult wisdom, this book was a lovely read. What’s best is that Morgan’s writing flows at a gentle pace, making it so I didn’t rush through it in just a day or two and allowing me to really get wrapped up in the tale.

The story is centered around young Annis Allington, who cares more for horseback riding than afternoon tea and marriage. There’s no riding side-saddle for this young lady; she has a natural repertoire with her horses and enjoys the strength she feels galloping around the streets of New York.

Unfortunately, her scheming step-mother, Frances Allington, has other plans for Annis’s life in order to fuel her own personal desire for a place among society’s elite. What Annis doesn’t realize is that Frances is a witch, who specializes in the use of the maleficia, or dark magic used to control others. Her specialty is working with poppets to control her target and make them bend to her will, which is how she landed Annis’s father as a husband.

Wishing to separate Annis from her beloved horse and lure her into a royal marriage, sealing a title to enhance the family’s reputation, Frances brings her to London to meet with a potential suitor. Well, from Frances’s point of view, the match will be guaranteed for she’s prepared to magically make it so, regardless of the feelings of either party.

James, who recently became the new Marquess of Rosefield, has the weight of the world upon his shoulders now that his family has passed. Coming to terms with the family’s dwindling finances and his father’s debt has put James in the position of having to make choices about how to best secure a future for the Rosefield estate. His mother, Lady Eleanor, eagerly and continually suggests finding a wealthy woman to marry, thus ensuring the future of their family’s legacy.

Conveniently, she has invited Frances and Annis to visit with them, hoping for there to be a spark. Well, there certainly is strong chemistry between James and Annis, but not the way their parents had hoped for. James is appalled at Annis’s forwardness in regard to her desire to become a horse breeder, and Annis cannot stand Jame’s conventionality or views on what is and is not appropriate behavior for a woman.

After the first day though, the feelings between them begin to shift. Annis can sense something is off about it; she’s experiencing embarrassing sensual feelings for James, whom she knows she is not truly attracted to at all. It’s clear that James too is feeling the allure, suddenly looking at Annis in a very different way.

Annis doesn’t know what to make of this and is truly worried about her predicament. She knows that Frances is trying to corner her into this marriage, and she’s also fearful of the consequences, such as losing her beloved horse, if she doesn’t play along.

Luckily, Harriet Bishop, Annis’s aunt and Frances’s cousin, has been following along with what’s happening in her family’s bloodline. Readers are introduced to her at the very start of the book, and I for one was instantly taken with her. I only wish I had an aunt watching over the development of my own magical gifts.

Both Harriet and Frances shared a great-great- grandmother, Bridget Bishop, who was hung for witchcraft during the Salem witch trials. Bridget had two daughters, Mary and Christian, who each went down their own witchcraft path. Christian followed in Bridget’s footsteps, freely using the maleficia to have her magical way, while Mary chose the path of magic that does not impede the will of others. Frances’s mother, unlike Harriet’s, had come from the lineage of Christian, who practiced the dark arts without discretion.

Harriet and her grandmother found Frances after her mother had passed. Living in squalor, they awakened her to the secret of the family’s witchcraft lineage and took her into their home to oversee her training. They had hoped she would not succumb to the maleifica’s strong powers, but ultimately the pull was too strong. Frances decides to make her way in the world using the witchcraft that compels, controls, and consumes others, expertly using her poppets to get what she needs in life.

“Witch should be a beautiful word, signifying wisdom and knowledge and discipline, but it isn’t used that way. It’s been made an insult, implying evil, causing fear. The word has been perverted.”1

I know I certainly feel this way sometimes, hesitant to share my personal spiritual path as a witch. Therefore I often found myself agreeing with Harriet’s thoughtful sentiments. She is an admirable witch and herbalist, maintaining discretion about her client’s personal needs. Though, she also knows how the beauty and power of witchcraft can be used for ill and malice towards others.

Stepping into to prevent Annis from the harm Frances wishes to callously inflict on her (though France might truly believe what she’s doing is for the best interest of all despite the lack of freedom of choice or ethics concerning the welfare of others), Harriet ventures to London herself to reveal the secrets of their family to Annis before it’s too late.

As for the summary, I’ll stop here. This is hardly a full synopsis of all the twists and turns the book takes, but it’s hopefully enough to convey the essence of the plot. Once Harriet, Annis, and Frances are in London together, it’s truly a battle of wills for the direction that magic will take.

What I love most about the book is Morgan’s portrayal of witchcraft, which I believe can only come from true reverence for the art, along with a bit of practical experience in the craft. There’s even a character who is a strega! This was especially heartwarming for me to read since I come from an Italian lineage.

Throughout the book are fun cantrips, such as the following:

“The touch of this remedy will move the heart
So kindness is the better part.
Leaf and root and flower bless
The heart that always answers, Yes.”2

The spellwork of the witches, especially with the poppets, is always described in detail. From the herbs used to make a salve to the description of using a piece of hair for the intended poppet, Morgan truly captures what goes into magical workings. She even includes the witches mixing in blood for their spell potency, as well as the use of an adder stone to give the work a boost.

Morgan also does a wonderful job of capturing life in the 19th-century for women. While Annis has budding feminist notions, there’s also still societal rules about what constitutes appropriate path’s for a woman’s live. Offering the option of witchcraft to a young woman is one of the most remarkable gifts to be handed down generation after generation — it’s more than just an alternative path, it’s a route to self-discovery and a life beyond the constraints of social norms.

Magic aside, Morgan has created some memorable characters. I really enjoyed the various cooks, maids, and personal attendants who accompanied the main characters. I can picture the different accents the characters used, thus further amplifying my connection to the story’s setting. I was especially taken aback by Annis’s intimacy with her horses, which gave me a new appreciation for the relationship between horse and rider. At times, I wished I could just hop on a horse and go for a little trot around the block!

All in all, The Age of Witches was a very fun read. I almost want to say it was relaxing. Yes, the plot was interesting, and at no time did my attention stray, but the pace was easy-going. This book had all the elements of a good story: family conflict, romance, and a whole lot of heart. Plus, It made me think about what type of magical practitioner I consider myself to be, and it inspired me to be more active in my herbalism and word craft for spellwork. I highly recommend it as an engaging witchcraft-fiction read!