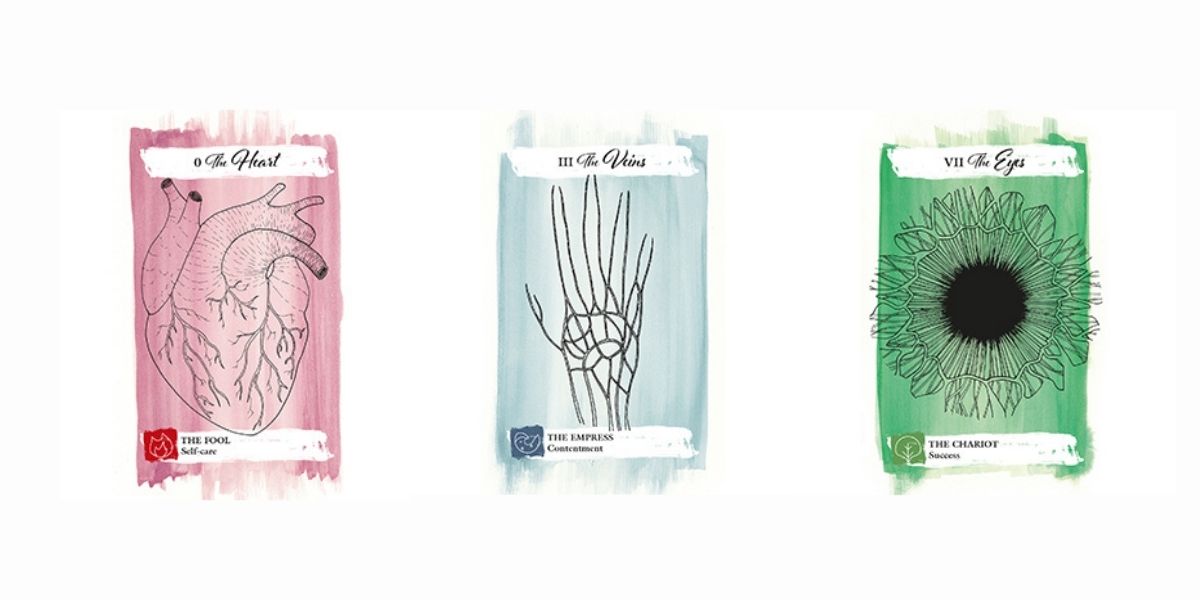 The Body Tarot, by Emma McArthur

After reading tarot cards for so long, I am always excited for adapted decks that use the tarot as a foundation to build from to create something novel. This is exactly what Emma McArthur has done with The Body Tarot, which bridges the magic of the body and the subconscious to reveal hidden insights. Integrating Western and Chinese medicine, this deck offers a unique look at what’s going on inside of us both literally and figuratively.

In the guidebook, McArthur explains how studying the physical form of our bodies deeply impacted her art and gave rise to the idea for the deck.

“When I first began doing anatomical drawings, I was astounded at the complex structure of our flesh, bones, and blood. The patterns, shapes, and colors enchanted me and I wanted my art to reflect how little we know of our inner workings and introduce that to my audience. It began conversations about the body that showed me that many of us are in the dark about what we actually look like on the inside. ”1

Then McArthur realized this lack of knowledge of our internal physical structures was similar to the hidden, mysterious workings of our subconscious mind too.

“This then made me think of how we often do not know the workings of our subconscious mind and we traverse situations reacting instinctively without realizing why we’re behaving in a certain way. It seemed to me that the tarot, rather than simply a predictive divinatory system, is also a profoundly useful tool to discover the impulses hidden within us. In this way, the idea of the tarot deck was born.”2

But this is no ordinary tarot deck. While it does have a twenty-two-card major arcana, there are no court cards, which I’m sure might prompt a sigh of relief for some readers since they can be challenging to read at times. In their place is a fifth suit, Metal, which corresponds to the suit Pentacles, as does the suit Earth. The other three suits are Wood (Swords), Fire (Wands), and Water (Cups). This integration of Traditional Chinese Medicine into the suits makes for slightly different interpretations than the traditional tarot deck. But once understood, it greatly enhances the readings, particularly if one has some background knowledge about Chinese medicine.

Regardless of your level of knowledge about Western or Chinese medicine, though, the cards themselves are helpful in determining their message. There is a keyword at the bottom of each card to assist with interpretation. The major arcana cards in The Body Tarot even have the name of the traditional Rider-Waite-Smith (RWS) card on them too for easy reference. Admittedly, the minor arcana is a bit more of a leap to learn since one has to remember the corresponding traditional suit with each Chinese element suit, but the keyword leans a hand in figuring out the meaning, as does the resourceful guidebook.

One of the most interesting aspects of the minor arcana cards is how each element suit has both a main and secondary organ association, which is featured on the card. For instance, the main organ of the suit Fire is Heart and the secondary organ is Small Intestine, both of which are featured on all the cards. For me, this added layers to the interpretation of the card because it felt multilayered.

I am someone who enjoys the interpretive process of discerning a card’s message, so I would piece together the information about the heart and spiritual intestine from the guidebook plus what I know about the traditional meaning of the card and come up with my own intuitive approach. Granted this didn’t work as well on the Metal suit, since that one felt a bit foreign to me, but in a delightful way. It’s even prompted me to learn a bit more about the Chinese elements, since this one is rarely included in Western practices.

For those who want a more straight-forward reading and aren’t as interested in playing around with the layers of these cards, the guidebook is also immensely helpful. For each card there are additional keywords and a description of the card’s message. Here’s a little sample of the guidebook for The Eyes, or the Chariot traditionally:

“Around 80 percent of our sensory perception comes from our eyes, if we are sighted. While we often hear the truism that appearances can be deceptive, for the most part, the other saying that “seeing is believing” is the one we follow. This card is telling you that your eyes are not deceiving you and the succes you may have been craving is your for the taking. There is an element of divine help (if you believe in a higher powers) or dumb luck (if you don’t), but the greater part of the victories indicated by this card will come from grit and faith in your own abilities.”3

I chose this description for this card because it appeared in a reading I was doing for a querent asking about making a career shift. Since I was reading with the deck for the first time, and it was a social get-together rather than a professional reading, we consulted the guidebook. The indication seemed clear she should pursue the opportunities in front of her and the combination of her own determination plus a bit of luck would pave the way.

As for the card illustrations, this deck is vibrantly colorful and beautifully simplicity. McArthur describes how she was influenced by Gray’s Anatomy, a 19th century medical reference book, by Henry Carter. Peering into the marvels of the body is such an interesting way to also delve into the wisdom of the subconscious, and McArthur does a wonderful job stimulating the reader visually to assist in making these connections.

I even spent time meditating with some of the major arcana cards, such as the Eyes, Ears, and Muscles, while doing an awareness breathing exercise through my body. Connecting to the physical body part helps me to better embody the messages I’m receiving from the deck, which is a neat aspect to it that is different from other tarot decks.

All in all, The Body Tarot is a very special synthesis of science and intuition. The blend of Western and Chinese medicine makes for multi-faceted readings that can be as straight-forward or layered as the reader feels called to explore. The learning curve of this deck will be inciting for readers who have the traditional tarot down-pat and are looking for new avenues of insight and creative interpretation, while beginners will be able to gather ample information from their readings through the descriptive guidebook. The best part of this deck is the connection it fosters by making the internal visible, prompting further curiosity and deep appreciation for all that goes on in the unseen realms of body, mind, and soul.