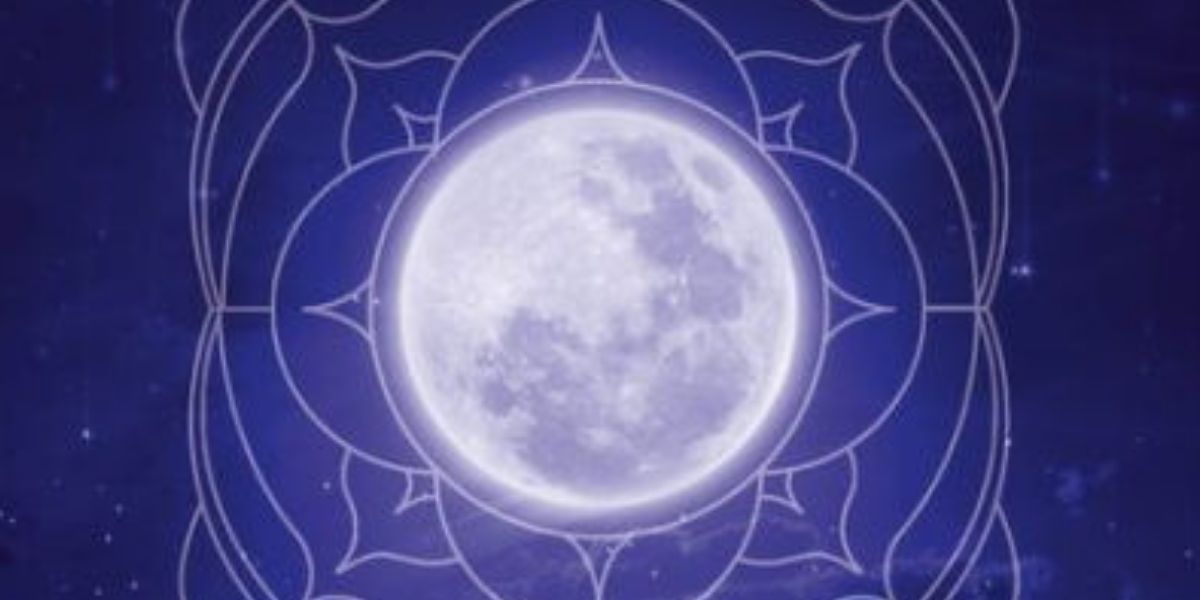 The Moon Oracle, by Caroline Smith and John Astrop

In this whimsical and colorful deck of cards and the accompanying guidebook for The Moon Oracle, authors Caroline Smith & John Astrop have created a system that tracks moon phases, moon mansions, and shares information on key Goddesses. Smith also provides the beautiful illustrations, which are rich with history and symbolism. Astrop and Smith were married and worked together to create this deck.  After a prolific career as a designer of children’s books, Astrop passed away in 2013.  Smith is an illustrator who worked alongside Astrop and also contributed to their creation of The Elemental Tarot, which was also released in 2021.

In the guidebook, Smith and Astrop chronicle the influence of the Moon from Shakespeare to scientific references. The eight phases of the Moon are explained as being similar to stages in plant life. Smith then utilizes this symbolism in her illustrations of the eight Moon phases in each of the four elements. This creates a section of 32 cards with colors that reflect the element and artwork that reflects the Moon phases as plants.

Did you know that the earliest astrology was Moon based, rather than being Sun-centric. For example, the Roman “Emperor Augustus used his moon sign, Capricorn, on his coinage.”1  This idea forms the basis of the 28 moon mansions.

The final section of cards comprises 12 goddesses and each aligns with a Zodiac sign. In addition to providing information for a reading, any Goddess card that is drawn also “presides over the question. She acts like a guardian Angel or fairy godmother who looks after your interests.”2

At first glance, the deck’s symbolism may be hard to read and understand.  However, the authors have done a great job of explaining how to use the different phases, mansions and goddesses for divination. I decided to test the deck with one of my Facebook groups.

I did a simple one card reading for ten people, and every person shared that the message was spot on and very helpful for helping her navigate some area of current life. These readings were all done for what I call a “general” reading. In other words, no one asked me a question beforehand. I simply pulled a card for each person and then shared a portion of the message from the guidebook. One friend said that the message was “eerily resonant.”

The information in the guidebook for each card is succinct, insightful, and rich in symbolism. The more I worked with the deck, the more clues and symbols I found, such as all eight of the phases of the moon appearing on each of the Moon Phase Cards, with the phase highlighted in a darker color for the specific card selected.

The creators of this deck also include several original card spreads to make utilizing this deck easy and beneficial. To make it simple to pull the correct Moon Phase card for the day you are divining, there are Moon Tables in the back of the guidebook for 2016-2032.

I also did a five card reading for myself utilizing one of the spreads shared in the guidebook. The spread I utilized was called  “The Elemental Cross.”3

My question revolved around whether it was time to create an astrology class I had been contemplating.  With the messages from the five cards, I learned that

What a great reading!  I’m ready to go!

The last card also included a message on timing and the month of “September” was referenced. To me, this means that it may take some time for the pandemic to slow down its spread, and as people are returning to a more “normal” way of life, I might plan my class for Fall 2022.

This deck would be best for a more experienced card reader and someone who has a basic knowledge of astrology, including the cycles and phases of the Moon.  I’ve been studying the Moon for over a year and I had to read and re-read the information to make sure I was understanding the symbols and selecting the correct card. For most of the spreads outlined in the guidebook, you’ll want to separate the deck into the three parts:  Elemental Moon Phases, Moon Mansions, and Goddesses. This is unusual, even for an oracle deck.

Since I tend to just “jump in” with most oracle decks, I was not initially aware of this and it led to a kind of muddled reading the first time I worked with the cards. I would say that most people will want to read the Introduction and the material for each of the three different parts of the deck. Without this background information on The Moon Oracle system, it may prove confusing and you might not receive a clear reading. Even with the spreads included, you may want to go through the directions and their sample readings, to make sure you understand how to use the cards for best results.

The deck comes in a sturdy box that holds the cards in a type of shadowbox indentation.  There is also room for the oversized guidebook to sit on top of the cards.  This box slides easily into a nice slipcase in the same rose color as the other box.  The guidebook is a larger size and has a rose card-stock cover. Each of the cards is shown in black and white on the page that gives the symbolism and meaning.

The deck itself is printed on a nice glossy card-stock, in rich, jewel-toned colors.  The back of the cards is printed in silver with the image of the winged goddess Artemis, a lioness and a deer.  The cards are a nice weight and fairly easy to shuffle. The cards are 3 X 5, so if you have smaller hands like me, you may want to use an overhand shuffle for the cards, rather than a riffle shuffle.

My favorite card in the deck is Moon Mansion #25, Rebel.  It features a red-headed lady hanging upside down in the nude.  It features both Uranus and Mercury in Aquarius, which is Astro-speak for “cares very little for rules and tradition.”4

Not only am I drawn to the illustration, I also love the message:

“If this card is drawn there is the potential for exceptionally bright thinking that produces sparks of genius. It indicates a powerful devotion to a cause. You are certain that your position is correct no matter how ‘out on a limb’ you seem to others. You must be prepared to act totally out of character to achieve your intended aims.”5

For those of you who are utilizing the Moon and her 28-day cycle and 8 phases to steer your life, this deck presents a divination tool for even better navigation.

I really enjoyed working with The Moon Oracle and look forward to more divination adventures.  This oracle card set would be great for an astrologer, an astrology student, or someone who wants to learn more about the Moon and using the Moon for guidance.

PJ Spur is an author, intuitive, spiritual mentor, hypnotist and past life regressionist. She does Tarot card readings, past life readings, grief coaching, and relationship healing.  Her book Navigating Grief with Grace is available on Amazon. She has hosted a weekly “Coffee & Cards” event with her Soul Compass Community for the past three years.