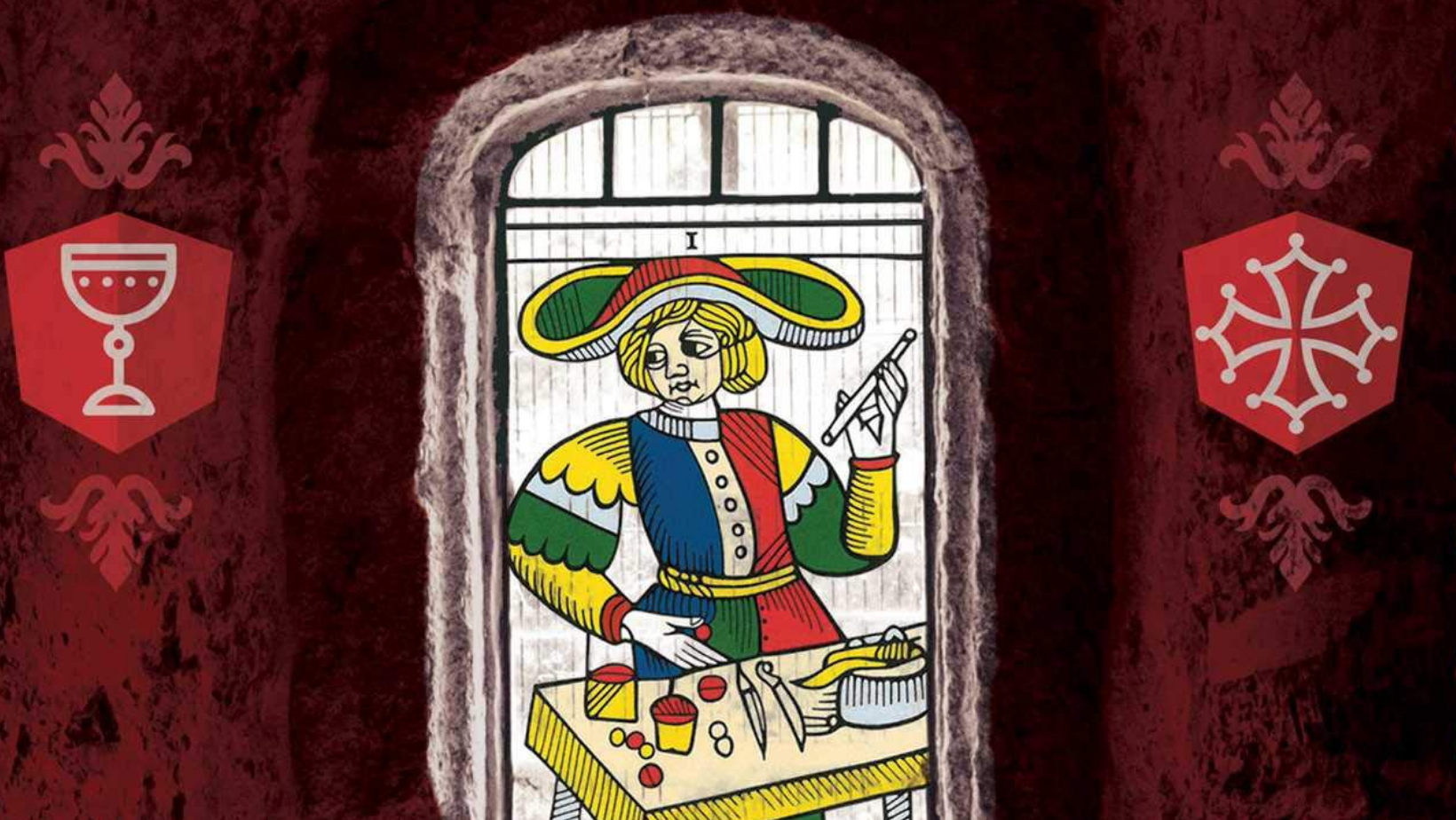 The Spiritual Roots of the Tarot, by Russell Strugess

In The Spiritual Roots of the Tarot: The Cathar Code Hidden in the Cards, author Russell A. Sturgess presents the story of a medieval group of Gnostic Christians who are later referred to as the Cathars. The Cathars originated in France in the 11th century.  Not well liked by the Catholic Church, Cathars were considered a threat and were removed from Western Europe by the Catholic Church around 1350.

They called themselves “Troubadours of God” and their theology was based on the Beatitudes from the New Testament Sermon on the Mount. They lived a life based on agape love and also espoused a theology of duality, one where both good and evil existed.   Their beliefs professed a “formula for escaping the world of the evil God and the journey that one had to undertake to return to the Kingdom of the good God.”1

No one really knows how the Cathars worked together to preserve the mysteries of this formula, which was their program of ascending to the good God. Sturgess admits that it is unlikely that the Cathars produced any tarot cards. However, they were weavers and may have woven small tapestries with the symbols of their theology or created small paintings of the symbols.  None of these remain due to the Crusades and Inquisition — all such artifacts were destroyed.

One of their key tenants was the idea of “being a fool for the sake of Christ.”2 The Fool’s Cap symbol and watermark would have been a mark of the Cathars. And, of course, the first card in the Major Arcana of the Marseille Tarot, as well as many other decks,  is a Fool.

What interested me most about the concept of this book was the melding of religious and metaphysical theologies. The idea that a religious group of Gnostic Christians could have hidden symbols that show the way to God in miniature paintings or small stained glass images that later became tarot cards is intriguing! When you consider that the clergy was among the few who were able to read and write in the 11th to 13th centuries, you might begin to understand their role in preserving these symbols.

The Marseille Tarot appeared in the 17th Century and told the Cathars’ story of the Fool and his transformative journey to Christ. Sturgess shares a complete history of the tarot and features many color plates of Major Arcana cards in various styles of cards.  One plate that I found fascinating follows the Fool’s Journey as the Major Arcana cards are laid out in an infinity symbol shape (Plate 30, The Cathar Code key, the cards by Jean Noblet, circa 1650).

Sturgess provides a thorough review of each of the cards of the Major Arcana, sharing key symbols, their meanings and how the cards both differ and mirror each other. My birth card is The Empress, so I was especially interested in learning more about this card. According to Sturgess, the symbols of the shield she holds, the cockscomb on her left side and her scepter all point to key characteristics of The Empress.  As both masculine and feminine symbols are shown, the Empress embodies the combination of male and female.

“This is a Cathar invention, symbolizing the hieros gamos, the sacred union of the masculine and the feminine that was Christ here on earth. In the world of the Cathars and that of the good God, when governed by Christ consciousness this was symbolic of the sacred marriage resulting in the androgyny of Sophia.”3

Sturgess goes on to say that the Empress is all about “the impending birth of the Fool, who is the Christ Incarnate.” 4

Another aspect that I found fascinating was the idea that there was no Devil card or Tower card before the 17th Century. These two cards may have been kept secret because of the role they play in revealing the “portal to the kingdom of Heaven.”5 And did you know that the Tower card was initially called the “House of God”? A common belief contends that the named changed to the Tower due to the structure shown in the center of the card.6

Sturgess employs a very scientific and thorough writing style. The photos of key pieces of Cathar history, the beautiful plates of tarot cards from various centuries, and important documents from antiquity make this story come alive.  After a history of the Cathars, Sturgess covers each card in the Major Arcana through eleven chapters of the Fool’s Journey. This book will appeal more to the Tarot aficionado, rather than a novice, who might be overwhelmed by the depth of the information.

I really enjoyed The Spiritual Roots of the Tarot and look forward to reading it again and doing an in depth journey into each of the 22 cards of the Major Arcana. My knowledge of the symbolism of the Major Arcana was enhanced greatly by what I learned. I’d recommend this book for Tarot teachers, expert readers, and others who study Tarot history and meaning.

To conclude, I will share one concept that Sturgess wrote that really touched me is the Cathars’ theology of love:

“The Cathars’ theology of love could be described in one word:  kindness.  As much as they understood the deep mysteries, in terms of how they were expressed in day-to-day life, it was simply about being committed to being kind.”7

PJ Spur is an author, intuitive, spiritual mentor, hypnotist and past life regressionist. She does Tarot card readings, past life readings, grief coaching, and relationship healing.  Her book Navigating Grief with Grace is available on Amazon. She has hosted a weekly “Coffee & Cards” event with her Soul Compass Community for the past three years.

One thought on “The Spiritual Roots of the Tarot, by Russell Strugess”