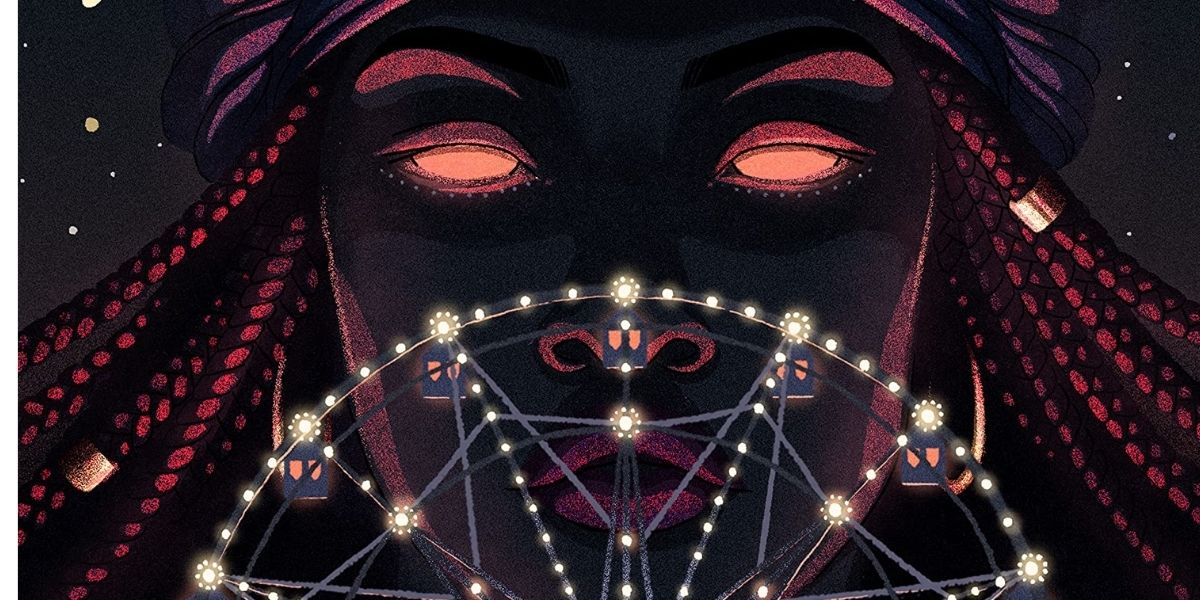 I’ve been overjoyed that my library has reopened after over a year of not being able to browse books. Immediately, Bacchanal caught my attention with its purple cover featuring a ferris wheel. After a quick skim, noticing the setting was a carnival with plenty of magic, I was excited to check out and get to reading. I can now say that Bacchanal is the best book I’ve read this summer so far!

The story takes place during the Depression era in southern America (Tennessee, Louisiana, Oklahoma, etc). Main character Eliza has been abandoned by her family and has been working as a maid to make her way in the world. She also has a unique gift of being able to communicate with animals, however she has yet to learn to control this power and it often ends in the animal dying.

When two carneys, Clay and Jayme, come to town in search of an alligator man, Eliza catches their eye instead and soon she finds herself on the road with Bacchanal. She quickly makes friends with a fun, varied cast of characters. What makes Bacchanal unique is that all the carneys are primarily black folks, some who even came from Africa to be in the show.

Through the story, Eliza develops romantic feelings for two men, creating an interesting love triangle. But she is primarily concerned with learning how to master her gifts and put together a show that will ensure her place at Bacchanal. She harbors dreams of finding her family, seeking them in every small town they carnival moves through, and she’s determined to save up money to find her sister.

Amid Eliza’s story, the reader is also privy to the workings of Ahiku, an ancient demon who feeds on the souls of children. An evil lingers around the carnival, which functions as the perfect feeding ground for the myriad of mysterious demons lurking within Bacchanal. Ahkiu is obsessed with finding the granddaughter of orisha Oya, who is the one person that can bring her downfall.

Finally feeling a sense of home and belonging among the other non-ordinary folks at Bacchanal, Eliza’s destiny rapidly unfolds to reveal the extent of her gifts and the greater purpose of her being there.

There are so many things I loved about this book, but I will focus on a few for the purpose of this review. First of all, Henry has done a wonderful job of portraying Eliza’s development of her gifts. I really enjoyed the way she writes about Eliza’s ability to communicate with animals, making it authentic with psychic imagery and animal personalities. I felt for Eliza as I read her struggles and felt connected to the animals myself via her communication with them. Eventually, Eliza discovers her own animal guides, and this part of the story was akin to her discovering both her roots and own personal power simultaneously.

Which leads me to the second thing I love about this book: the interweaving of African spirituality into a truly remarkable tale. Blending demons, Yoruba, and witchcraft, this tale really explores the roots of this magic in the American south. I have never read a book that did such a good job weaving them into an existing fictional novel. Plus, I truly loved that Bacchanal was an almost all black carnival, giving insight into the way of life for African Americans at the time.

Furthermore, Henry has craft very distinct and one of a kind characters that have left a memorable impression. I really enjoyed being immersed in the life of Bacchanal, from the daily on-goings of the carneys to the epic shows they performed. She expertly interwove their personal narratives, leading insight into each character and providing a depth of context to frame the relationships taking place. Many of the characters themselves had wrestled with demons, which landed them at Bacchanal, and there’s a very exciting mixture of redemption and revenge that takes place between characters.

The story moved at a slow pace for a good portion of the book, which was actually quite refreshing for a change because I didn’t breeze through it in a day or two. I was able to linger in the sensation of the whole story, captivated by the unfolding mystery, but content to let the tale move at its own pace. It felt reflective of the pace of life during the Depression in these smaller cities the carnival was moving through. The last book I read that immersed me this much in carnival life was Midnight Circus, but I enjoyed how Henry didn’t create a fanciful reality and focused the book more on the actual setting and lifestyle of this era.

I will say the ending took me by surprise in that it moved very quickly and culminated in almost a blink of an eye. After such a lengthy lead-up, for a bit I couldn’t believe how quickly the story came to an end. I think this would be the only aspect of the story that I wasn’t enraptured with. While all the loose ends are tied up, I would have preferred a bit more detail for the grand finale.

As far as the occult aspect of Bacchanal, the whole tale is imbued with mystery and magic. Henry doesn’t dress up pacts with demons or Eliza’s gifts, and presents a portrait of how these things exist in the mundane world, though perhaps unnoticeable to the untrained eye. Ahkiu and Eliza both take some time to figure the other one out, and they’re both doing plenty of magic or spiritual communication on their own. It was interesting to see the way Ahkiu used her ancient power, while also being engaged with Eliza’s story of discovering her own.

All in all, I found Bacchanal to be fully satisfying on many levels, and I’ve been recommending it to everyone as a good read. I think those with an interest in Yoruba would have a particular interest in this book. Watching Oya nurture her spiritual child Eliza is quite rewarding, and this book reminds us of the complexity of family dynamics. With the help of trusted friends and discovering one’s own powers, destiny emerges.