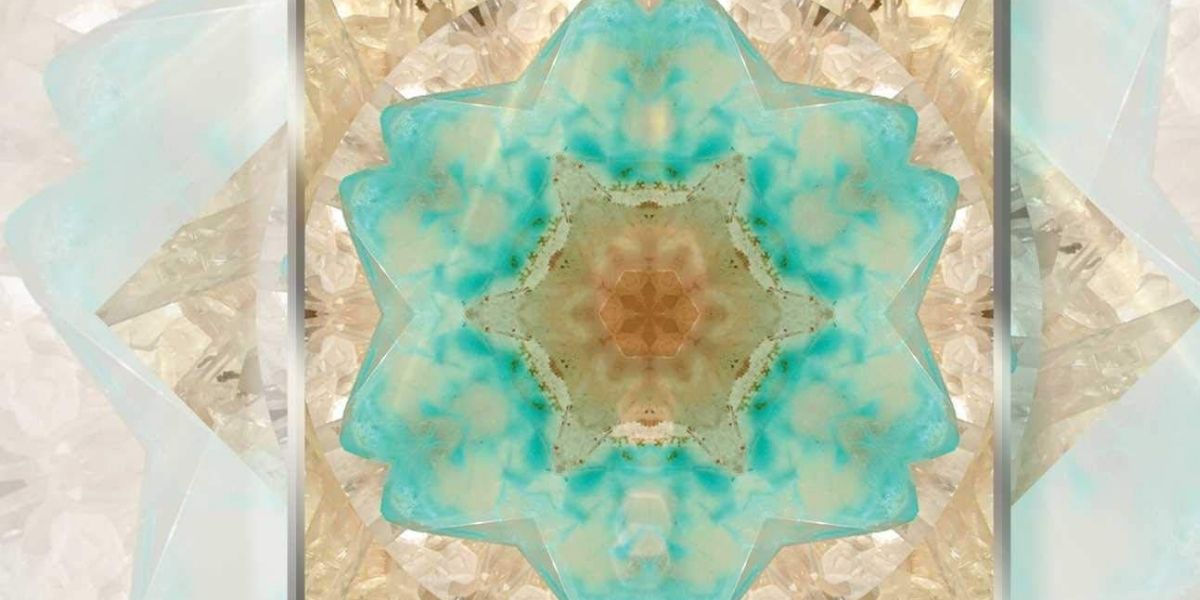 I was drawn to the Crystal Oversoul Cards: Attunements for Lightworkers by Michael Eastwood because of the intricate geometric crystal designs on the cards. I thought this deck might help me connect with the sacred geometry within different crystals, hence changing my state of consciousness in meditation. While these cards have shown to be useful for attuning to different perceptions, overall they are quite different than I expected in both positive and negative ways.

First of all, the cards are very big and bulky in my hand. Unfortunately the large size of the cards seems to have detracted from the crystal images on the card. They don’t appear to have enough pixels for the amount of space they take up on the card, similar to if you’ve ever tried to make a photograph bigger and all it does is lose the quality and look stretched out. The only redeeming quality is that the box is nicely designed; it has a magnetic strip along the side, allowing for easy opening and closing, that keeps the box securely shut when being stored.

I also think I underestimated just how New Age these cards would be as an oracle deck. I’m a big fan of working with crystal energy, and I can be receptive to ideas about Lemuria and Atlantis. However, my first impression was that this deck pushed it a bit too far and was very untethered in its approach to attuning to these crystals energies. The whole deck requires knowledge of working with additional chakras beyond the traditional seven: the eighth chakra, the ninth chakra, and the Earth Star chakra. I wasn’t familiar with this, nor could I find much information on them. Leery of channeled information, I will admit I approached this deck with a bit of skepticism.

Eastwood has previously published two card and book sets, Crystal Oversoul Attunements and Crystal Oversoul New Earth Attunements, which he combined to make this deck. An Oversoul is described as “the collective soul or matter all individual crystals in their field will identify and communicate with.”1 I take this to be almost like a common soul of the crystal, which people can communicate with. According to Eastwood, in the past humanity had a closer connection to the Crystal Oversouls, but they still can play a role in our evolution to new levels of consciousness and spiritual awareness. He compares the Crystal Oversouls to mandalas or templates, writing:

“Their visual manifestation as mandalas serves as a clear purpose and the intricate, never ending and overlapping patterns within each temple mirror the differences and uniqueness. Every fine detail stimulates our consciousness to remember specific aspects of our vastness; to reconnect with the awareness of our being part of a greater unfolding, of our divine self.”2

After sharing his own experience of working with crystals and describing how co-creating with them can be a spiritual path, Eastwood moves into teaching the deck user about attunements. I finally became more comfortable with his concept of an Oversoul because he also discusses how the crystal is overseen by a Deva, which I have read much more about and am already familiar with. This made the leap into understanding the Oversoul not quite as far as I had felt it was before. He writes, “When we direct our healing or intent through a crystal, it is amplifying back the consciousness of an Oversoul and Deva directly into our aura.”3 This provided me with a more grounded understanding as proceeded with my first attunement.

Another surprising thing I discovered, which made me more confident in getting started with this deck, is that Eastwood recorded meditations for cards 45-66 because they are especially important energies for the awakening of humanity. There is a link to download them through Inner Traditions website. Hearing Eastwood’s voice was soothing, and it helped me to feel more connected to the cards than when I read the description in the guidebook. I honestly wish he had done the meditation for all the cards and not just these final ones in the deck.

At last, I decided to do a supportive attunement, intending to learn from the image and information. I chose the card Petalite. This card spoke to experiences I was having at the time, including desiring to integrate both intellect and intuition, as well as cleanse my energetic field to release outdated patterns and limiting beliefs. It felt particularly apt for the timing of the pull too because it was during a waning moon phase, which is the time frame this card corresponds with. I spent time holding the card to my chest, envisioning the energy of Petalite merging with my own. This was when I started to feel a sense of reciprocity with the Crystal Oversouls. As I opened myself to their energy, I did indeed start to feel new levels of relaxation, awareness, and wisdom emerge from within.

I realized I had misjudged this deck. My first hasty pull upon receiving it has been hoping for an immediate answer, which the guidebook does not provide. Eastwood offers an attunement for the deck user to open up to the crystal’s energy in their own life. The essence of this deck is engaging in one’s own energy work to facilitate this relationship with the Crystal Oversouls. One will get out of this deck the energy that they put into it.

While this might not be a deck I pull from every day, I feel reassured knowing I can call on the Crystal Oversouls in my spiritual journey as allies. It is interesting to connect with the crystals energetically, merging my auric field with their Oversoul, rather than just touching my crystals or meditating with them physically. There is a subtle dimension of consciousness at work here, and the cards do a wonderful job of facilitating this relationship even without the crystals themselves being in my physical presence.

Therefore, I highly recommend Crystal Oversoul Cards for energy workers who are looking to enhance their connection with the crystal realm. Whether or not one wishes to make the connections to the distant past, such as the time of Lemuria or Atlantis, there is still a great benefit for the future in reuniting with the wisdom of the Crystal Oversouls. Yes, to use this deck requires tapping in beyond the ordinary senses and opening up to new perceptions and ideas, such as the additional chakras, but energetically it will be impactful