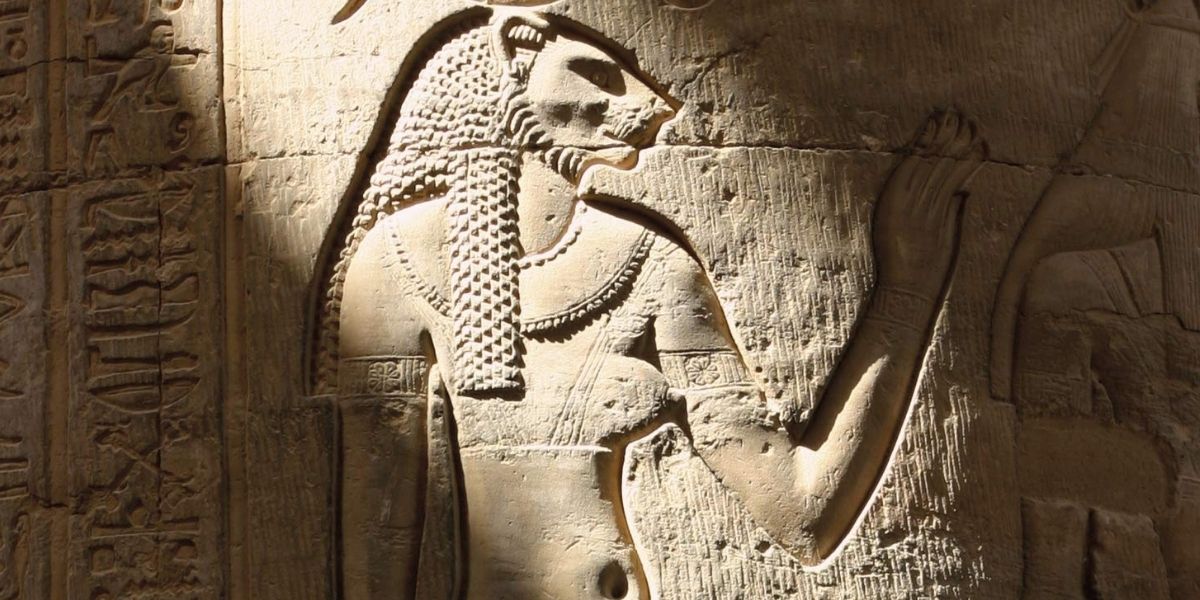 “Sekhmet is a Goddess for today’s world.  She fiercely protects right order, returning balance to the world, and just as fiercely protects those who celebrate Her.  Her name means “Powerful Woman” and She symbolizes courage and strength as well as inspiration and comfort.”1

Pagan Portals – Sekhmet: Lady of the Flame, Eye of RA by Olivia Church is one of those titles that seems synchronistically to appear exactly when it is needed, much like the Goddess Sekhmet Herself.  And, I would even go so far as to say that in general, the rising interest in the ancient Egyptian deities aligns well with the societal need for a way of devotional that is powerful and terrifying all at once. Sekhmet, as Candace Kant so eloquently expresses in the quote above, is exactly that energy.

This book provides the reader with the tools of information and inspiration that allow for the cultivation of a connection to Sekhmet at multiple layers of experience. Much like the Goddess Sekhmet, the many paths that lead to Her wisdom hold multi-layers of meaning in and of themselves. And, as is the way with the Egyptian Deities–each has many epithets that only give the smallest hint of what lay hidden as you get to know them more deeply. To that end, Church has separated her book into seven chapters that take the reader from ancient knowledge of Sekhmet and the mythos surrounding her and concludes with a more modern approach of devotion and worship.

Preceding the Introduction there a several pages containing abbreviations used throughout the book and a timeline of Ancient Egyptian history, as well as a geographical map of the more prominent Egyptian sites relevant to Sekhmet. The reader is given a very clear understanding of the the book’s intentions and what can be expected in delving into the Egyptian pantheon.

“Sekhmet is instantly recognizable today from her fierce appearance, bearing the proud head of a lioness, crowned by the sun disc and cobra, with the lower body of an Egyptian woman.  As with many Egyptian deities, Sekhmet is a complex character with a dramatic mythology and enduring influence, which continues to inspire people today…. Sekhmet is a challenging Goddess and this introductory volume will present her without airs and graces…. She is a Goddess of contradiction, sovereign over violence and sickness, as well as patron of healing and protection; she is truly the Mighty One.”2

These few sentences offered in the Introduction set the tone for what Church follows though in providing to the reader in the chapters to come. Each chapter offers the reader the ancient practices, as we know them, of devotion and interaction with Sekhmet and concludes with a section entitled “A Contemporary Pagan Perspective”. Within its writings are ways that the modern practitioner can meld together the inroads laid by the ancients and make them more relevant and accessible within a modern culture.

As a fitting beginning of introduction to this Goddess, “Chapter 1: Mythology” tells of two myths that convey the origins of Sekhmet.  The subject of Sekhmet’s actual birth is one that exemplifies the mindset of the Ancient Egyptians and the adaptability of their Deities to evolve/spilt and become aspects of various states of being and temperaments rather than singular notions of anthropomorphic overlay.

She is one of several Egyptian Deities that have rather ambiguous beginnings, depending on who is telling the story and where the first stirrings of Sekhmet take place. In reading these myths, we see another layer typical to the Egyptian Deities, where one Deity morphs into another, not quite a hiving off into another half, but in keeping with the Ancient Egyptian psycho-spiritual perspectives, the second becomes an aspect of the first’s personality. This also speaks to the overlapping and true interconnectedness of the Egyptian Deities.

The first myth presented is the Myth of the Eye of the Sun (The Wandering/Distant Goddess) and the second, which has come to be the more familiar regarding Sekhmet – The Book of the Heavenly Cow/The Destruction of Mankind. In the second myth, Hut-hor (Hathor) through her destructive actions against humanity at the request of RA, her father, Hathor sets out to wreak havoc on those who had turned away from the adoration of RA.

Hathor becomes Sekhmet as another form of being that is the perceived antithesis to the loving and regenerating nature of Hathor and drawing upon that rage and anger, Sekhmet, independent of Hathor comes into being.

“Egyptian mythology makes it clear that Sekhmet “came into being” when Hut-hor (Hathor) manifested true rage within herself.”4

As the reader progresses through Pagan Portals – Sekhmet, the chapters provide a very clear and concise image of the breadth of Sekhmet’s attributions and how important a Deity she was to the Ancient Egyptians. Chapters two to four speak to her designations as “The Devouring Flame” (chapter two), “The Great Healer” (chapter three) and as “The Eye(s) of RA” (chapter 4). And, chapters five to six provide the reader with the ways in which Sekhmet was revered in her “Temples & Cults” (chapter five), “Rituals and Festivals” (chapter six) and the “Magic and Prayers” (chapter seven) offered in adoration and supplication.

The final chapter, “Worshiping Sekhmet Today”, speaks to some of the powers that were attributed to Sekhmet in ancient times and how these were directly affected by Egyptian culture, geographic location, and more. And, in recognition of those energies, Church encourages the reader to also see from an alternative perspective that worship is impacted by their own culture, geographic location, and worldview.

“I believe that Sekhmet’s ancient manifestations according to the Egyptian ancestors should be considered alongside the perspectives shared by their modern Egyptian descendants and contemporary Pagan experiences of her… As a contemporary polytheist I do not believe that deities remain static and frozen in their first appearances in human culture. I believe the Netjeru, like deities from other cultures, respond to their devotees and changing times…. that they travel with their devotees and are not limited to a single landscape, although they will always retain the memory and connection to their original land and culture.”5

“The Appendix: Key Egyptian Names and Words” is a welcome addition to the book and contains the Ancient Egyptian name/word and its Greek counterpart after assimilation into the Greek pantheon. The encouragement given by Church is for the reader to familiarize themselves with the original Egyptian name–a key factor in aligning with their energies. The Bibliography is a lovely blend of titles that are academic/historical in nature and those more recently written that give an expanded view of the gifts of Sekhmet and the Egyptian pantheon and cosmology in general.

The test of a valuable title is one that can engage the reader and stimulate interest in the subject matter whether the individual has prior knowledge to build upon, is simply curious or just ordered the wrong book. Oh, and by the way about that last statement of a “wrong book” there are no coincidences! Pagan Portals – Sekhmet is definitely in the category of valuable and informative.

Regardless of what path or tradition you have your spiritual roots anchored within, it cannot be denied that most everything relates back to the Ancient civilizations. And, the Ancient Egyptian world view, their Gods and Goddesses hold a particularly vital place in that lineage. However it is that you come to this book there is a wealth of wisdom in the energies of Sekhmet. And, there is so much more to Her story than a single title could contain. Church has piqued the interest of her reader and what lay within the fires and ferocity of that interest could just be the Divine birthright that changes worlds for the better.