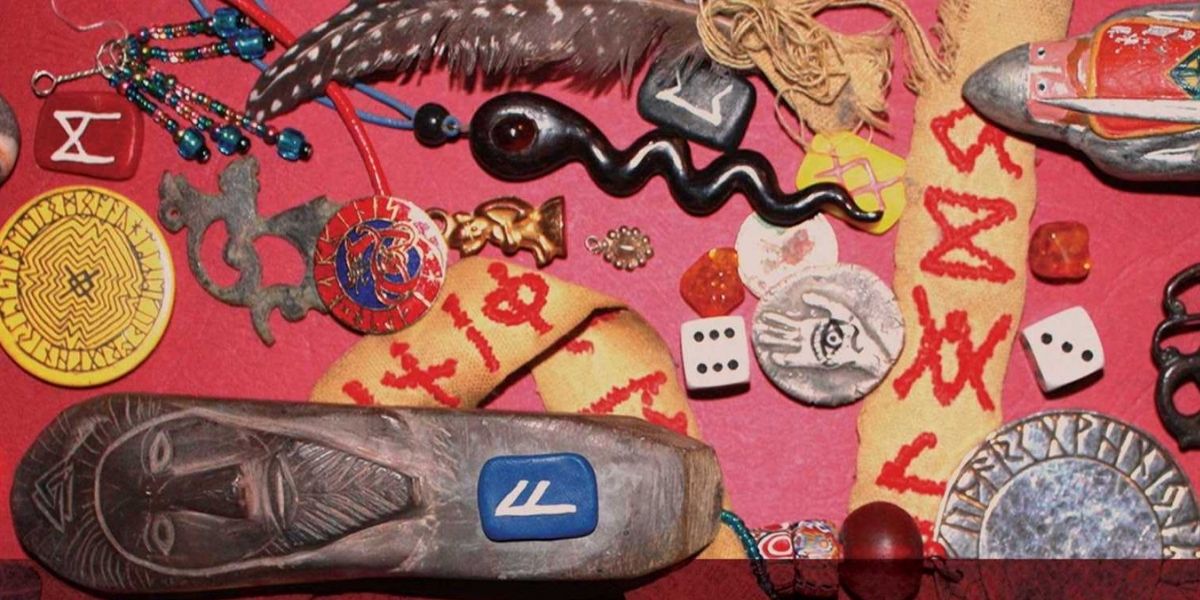 The Ancestral Power of Amulets, Talismans, and Mascots, by Nigel Pennick

Nigel Pennick is the author of over 50 books on various esoteric topics and an authority on ancient belief systems, traditions, runes, and geomancy. His latest book, The Ancestral Power of Amulets, Talismans, and Mascots: Folk Magic in Witchcraft & Religion, doesn’t disappoint: this weighty tome is an absolute must have for anyone even remotely interested in those topics.

This book seems a bit intimidating at first due to its size, but please do not let that deter you from picking it up. Anything, and I mean anything, you ever wanted to know about talismans and amulets is in this book. Pennick provides a visual narrative as well as a written one, and that additional information is invaluable.

The amount of information in this book is staggering and thoughtfully presented. The table of contents clearly lists the various topics being covered and provides the reader with an opportunity to jump right into whatever strikes their fancy. For me, that chapter was “Animals and Their Images”. In this chapter, Pennick states:

Pennick goes on to explain the significance of the pig, ram, cat, fox, dog, bear, elephant, and tiger. Not only is the information in this section incredibly useful, it’s also very current. There is a photo (Fig 23.4) of the mascot of Motörhead, War Pig which according to Pennick, is “an emblem of resistance”2.

This differs from the usual interpretation of the pig symbolizing luck and fecundity, and with the inclusion of War Pig, Pennick is able to capture the entirety of the symbolism behind the pig. This kind of well-roundedness is what makes this book so fascinating; it doesn’t just focus on one area that might be more relevant in today’s society. Pennick drills down into the very core of the subjects in this book and provides a vast array of uses, both past and present, that are more relevant than one might think.

Another chapter that truly resonated with me was Chapter 21: “Trees, Plants, and Seeds”. Having grown up on a farm surrounded by forests and growing our own food for part of the year, I found this section to be particularly relevant to me personally. Our forest was mainly cedar and oak trees and as children, my brother and I would quite often spend the majority of our time outside up in the boughs of one of the larger oaks. I’ve always felt an affinity for oak trees and still collect acorns for use in my own magic.

Pennick distills the essence of the mighty oak into knowledgeable bites that present the leafy giant in a very magical light, saying, “In the European tradition, the oak (Quercus robur) is the most powerful tree of them all, sacred to the sky god variously called Zeus, Jupiter, Taranis, Ziu, Thunor, Thor, Perun, and Perkunas”3

To me, this is a perfect example of what this book is: a reference tome to be pulled down and used when exact information is required. Honestly, I can’t think of another book that does this so well and with such precision. I’ve never heard of Perun or Perkunas until this book. #alwayslearning

While the actual structure of the writing might throw some people off due to its clinical directness, I find it to be in line with the information presented. This isn’t a how-to book: you will not find spells or meditations or any sort of magical direction here. This is a research book of magical items and while there is some information on how specific items have been used magically over the centuries, that isn’t the point.

Some people pickup books such as this with a view to bypassing some of the work they need to do to strengthen their own magic. This book won’t do that, as it is not meant to be a supplement to personal practice. The multiple page bibliography at the back of the book is a clear indicator that this is a reference book and not a practical magic volume. While there are some charms and incantations included in the various chapters, they are not meant as actual spells but as examples of what would be done or said at the time of the amulet being created or activated. This distinction is important.

This book is meant for those who have a genuine interest in the history around amulets, talismans, and mascots and who are willing to spend a bit of time in the investigative space. I found that I went down many a rabbit hole while reading this book, in that I would turn to the extensive bibliography at the back and be drawn into another book on the same topic and then all of a sudden it’s five hours later and my cats is squawking at me to be fed. That is the sort of book this is — beautiful and mind-opening.

I have made amulets and talismans my whole life; as a child I wasn’t aware of what I was doing until much later and now I’ve refined my practice. In reading this book, I understand more clearly why I make the things I do and why I am drawn to specific materials time and again. As Pennick says:

“The amulet is more than a mere “object” or “artwork”. It’s a transcendent communication between human beings and the powers of the natural world that manifest in myriad ways.”4

As witches, we have an innate need to create a symbol of our will: be it for protection, wealth, love, health, or any other reason. Having a tangible object to imbue with our will is how many of us ‘do’ magic. I will be keeping The Ancestral Power of Amulets, Talismans, and Mascots handy as a reference tool for many years to come.