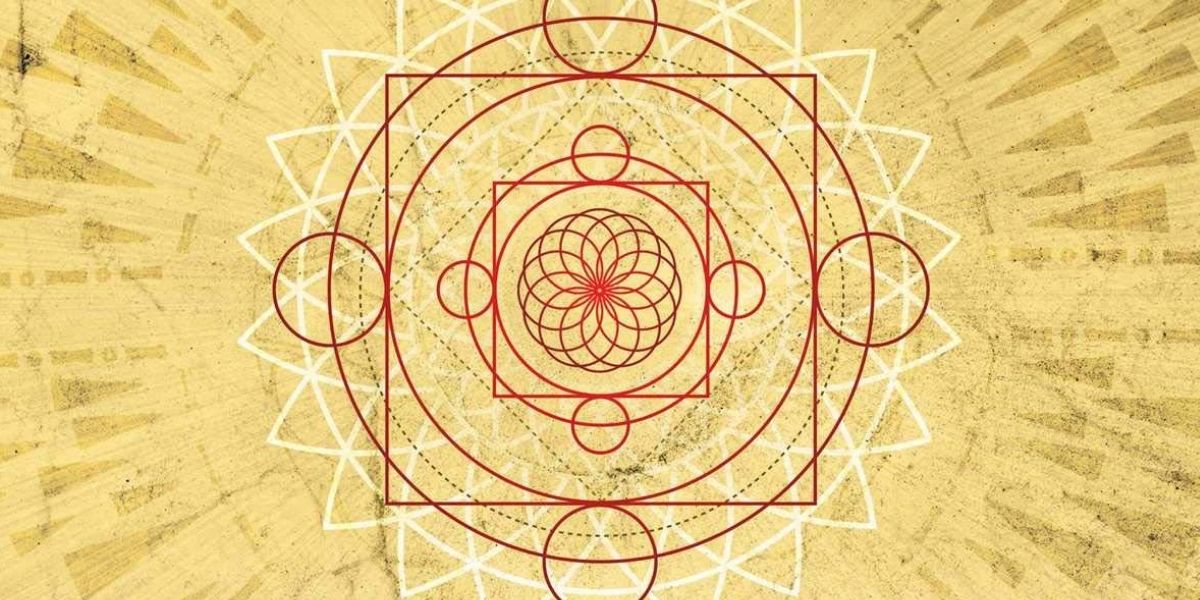 There are countless stories of aliens gifting humans with higher intelligence, changing the course of human history (we’ve’ all seen an episode or two of Ancient Aliens), but angels? In his book Sacred Geometry: Language of the Angels, Richard Heath puts forth the idea that perfect radios numerical relations are what lead to megalith buildings that encapsulate the divine wisdom of a harmonic creator.

“Angels have the role of bringing about the manifest universe through their direct imagination of ratios and geometries. Once the megalith builders, in their astronomical journey, started using (a) alignments to the Sun and Moon, (b) the counting of days in longer cycles, and (c) the comparison of results within geometrical forms, humans developed minds similar to but different from those of angels.”1

Richard Heath is a well-established author on this topic, and some of his previous books include Sacred Number and the Origin of Civilization (2006) and The Harmonic Origins of the World (2018), which I also reviewed here. He writes about and believes that numbers are the origin of human’s religious cosmologies and that these sacred proportions were shared with humans by a higher intelligence, in this case what he describes as angels.

The heart of Heath’s theories in Part One: The Universal Will is that geometry draws on rational measures of the world externally, but there are also ratios that bring order to life, not simply the numbers themselves. Within these divine proportions, the great connection to the sphere of planets occurs. By drawing on the ancient systems of measurement, along with reconstructing their musical tuning theories, larger patterns reveal themselves.

Heath delves into sacred sites to show these proportions, as well as demonstrate the connection between geometry and planetary movements. He begins by explaining different triangles and their symbolism, and then he explains the squaring of circles in monuments such as The Great Pyramid of Giza and Stonehenge. Also explored in this section are Sanchi Great Stupa and the Hagia Sophia.

Part Two: The Cosmic Individuality explores made me recall a lot of information from his previous book The Harmonic Origins of the World, but added lots of new information still. I really found it fascinating to reflect on Pythagoras’s development of a cosmological theory based on numerical tuning, which included Tetractys, or pyramidal arrays of numbers  which create octaves.

I do hope I am explaining this correctly, as even writing the review is a process of synthesizing the material for me! To be honest, I am not going to pretend like I fully understand the concept, as there’s a lot packed in here, but it got my mind thinking about the relationship between ratios in sound and the physical world.

“The inner story of the power of the octave to provide a unified God and creation provided the outer story of the Bible. And its inner numerical metaphor of numbers preserved an inner doctrine of astronomical harmony surrounding the Earth.”2

Pondering a relationship between musical cosmology, the movement of the moon and outer planets, and sacred geometry is truly mind-blowing to me as an astrologer. As Heath explains, megalithic astronomers used measurements based on horizon events, such as sunrise, sunset, and eclipses.3 Using this method to establish what he named a Lunation Triangle, the synod of Jupiter can be measured.

The cycles of Jupiter allowed for a ratio to develop, which revealed a harmonic ratio between the Jupiter synod and lunar year. There is also a ratio of the Saturn synod, which when looked at in conjunction with the synod of Jupiter, plays a role in the story of Jesus and how his symbolism happened through the “planetary world of time and its harmony.”4

As the book progresses, Heath spends immense time on elucidating the sacred geometry of Glastonbury, along with Islam. It was fascinating to read about the harmonic codes of the Kaaba. He even delves into the development of egoism, and how this too is a part of planetary harmony.

I realize by now your head may be spinning, as not only is the math complex (I doubt I will ever understand Heath’s calculations), but there’s also an assertion of higher intelligence in the world which links religious symbolism, great buildings, and music all through the sacred power of geometry. It’s a lot to take in, but it’s truly a fascinating topic that I am happy to have explored in this book.

I like how the manifestation of religion and other facets of society can be explained through the underlying principles of planetary harmonic resonance, numbers, and geometry. It brings a whole new dimension to our existence. And while it may not seem like a spiritual view point, I have truly found embracing this information to be paradigm shifting for my own journey.

Reading this book has made me grapple with concepts such as the influence of planets on human events, the true nature of the universe, and the magnificent, though forgotten, geometry behind sacred sites. I will admit it took me well over a month to make my way through this book, and oftentimes I had to reread a section multiple times, wondering if I was truly comprehending it. However, it has been a worthwhile pursuit that I’m happy to have made my way through.

My only complaint is that at times, it feels like the numbers are supposed to speak for the information in the book, and I think a little bit more discussion would have helped me to understand the context of the calculations a bit better. Like I see the math, but I don’t know how to translate it or jump to the conclusion that Heath has reached. If there was a bit more detail about how the information was extrapolated from the math, I might have had an easier time following along.

I can also say I am grateful to have read Heath’s prior books as well before diving into this one. I had a greater understanding of the general concepts he was presenting, and I am not sure it would be so easy to dive into this book first. For this reason, I recommend it to people who have prior exposure to Heath’s work or are very comfortable with detailed mathematical calculations.

All in all, Sacred Geometry frames the foundation of the universe, physical building, and human life in an entirely new way. By focusing on the mathematics of that time, rather than the abstracted forms used now, a new perspective emerges. I am open to the possibility of a higher intelligence imparting the template for humanity to grow, and I enjoyed how this book pushed the boundaries of what’s commonly accepted in many fields, from religion to science to math.