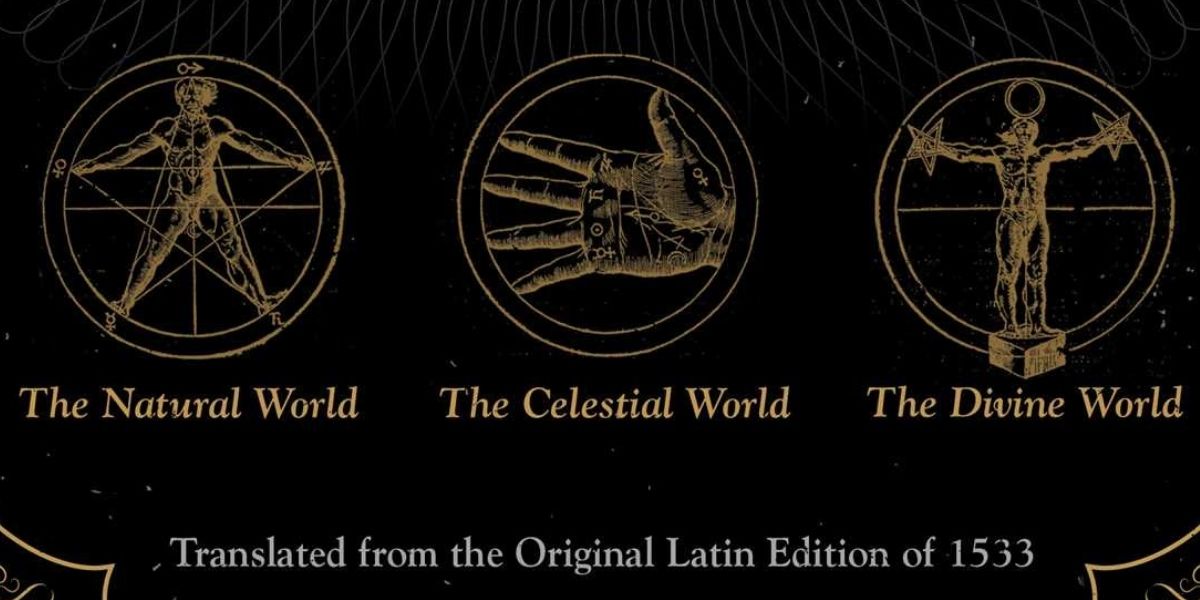 As a practicing astrologer and magician, of course I’ve skimmed Three Books of Occult Philosophy by Heinrich Corenlius Agrippa. It’s a foundation of Western occultism after all. But if I’m being honest, the editions thus far, such as the one edited by Willis F. Whitehead in 1898 or more recently Donlad Tyson in 2018, just never seemed to keep my attention. My experience reading Eric Purdue’s translation of Three Books of Occult Philosophy thus far has been entirely different though. I’ve been utterly engrossed, pouring over the information, meticulously researching references to other sources, and for the first time comprehending the text.

And I think this is because there is a prominence to this set. The sturdiness of the black box that houses the three books (The Natural World, The Celestial World, and The Divine World) takes up space, making itself known on my bookshelf. This is one of those sets I know I’ll return to year after year, making the quality of it very important. Plus, I feel pretty cool having it displayed in my living room. It is a truly collector’s item for one’s occult library, as well as a worthy investment for extensive amounts of wisdom within the text.

The books themselves are very big! I measured them, and they are over 10 inches tall and 7 inches wide. I personally love this because I am often referring to them in my practice and it’s helpful to have such a heavy-duty, substantial book where I am not constantly having to try to keep the pages open or squinting to read the writing. For instance, I’ve spent hours drawing the planetary seals for sigils and the size of the book makes it much easier, especially since sometimes I even lay paper over the images in the book to copy from.

Another significant thing about Purdue’s translation of the Three Books of Occult Philosophy is the first English translation published in the last 350, adding to the distinctiveness of this particular set. I thoroughly enjoyed, as well as found helpful, Purdue’s “Translator’s Introduction” that describes why a new translation was needed, in addition to how his translation differs from others. Some reasons cited for the need for this new translation include mistranslation, lack of technical knowledge of previous translators, archaic English that is distracting to read (yes, I concur on this one!!), and incorrect graphics. In some cases, Purdue explains, flaws in previous translations have continued to be compounded rather than corrected with additional translations.

Purdue’s intention in producing this translation was to create a new edition of the Three Books of Occult Philosophy directly from the original Latin and to cross-reference Agrippa’s sources.

“Our translation attempts as much as possible to cite sources that were available to Agrippa. This has allowed us to largely reconstruct Agrippa’s library and has demystified his method of obtaining it. This shows that Agrippa, rather than the writing from texts now missing or obtaining books from secret sources, instead was a mainstream scholar of his day, using texts widely available.”1

And this is where Purdue’s translation really shines, especially for any studious practitioner. The footnotes and sources provided have led me in so many new directions. Being able to look at the footnotes and see the source where Agrippa’s content is being drawn from has been immensely helpful in doing my own research. Two topics prominent in my practice, which I often write articles about, are the hierarchy of angels and numerology. It’s been tough finding primary sources on both these subjects, but suddenly, in reading this version of Three Books of Occult Philosophy, I have new leads from the detailed footnotes of books I can further explore. I am deeply appreciative of Purdue’s dedication, concentration, and effort to add these references into this translation. There is also a very interesting bibliography and comprehensive index in Book III, which again, is monumentally helpful for occult practitioners and researchers.

Another really interesting addition to this translation is quick summaries on the side of what Agrippa is talking about. For instance, in Book I’s section “Of lights and colors, lanterns, and lamps, and the colors distributed among the stars, houses, and elements.” there are side notes of what Agrippa is writing about such as, “The color of the planets.”2 and “The color of the humors.”3. These are incredibly helpful when doing a quick skim while looking for something in particular.

From a historical standpoint, Three Books of Occult Philosophy is the primary source of Western occultism, and it’s interesting to see how long some beliefs have existed, such as astrological correspondences or concepts about the elements. Even if one feels they are an expert, going back to these foundational texts really helps to see the origins of many occult beliefs embedded in our culture. It’s like a beginner’s 101 course, but one that is dated nearly 500 years and really encourages one to put themselves into the minds of magicians of the past.

However, what I’ve found most surprising is the relevance of the text centuries later. Not everything (I certainly cringed a bit reading about the bewitchment women use to lure men into love and the poisonous effects of their menstrual blood on crops), but a good majority of the text is viable for one’s modern magical practice. This is particularly true if one is drawn to arcane magical practices of times long gone, rather than the current trendy paradigms, such as chaos magic. And I think Purdue’s translation really aids in making the content of the Three Books of Occult Philosophy accessible for all.

Overall, this is by far the best translation I’ve ever seen of the Three Books of Occult Philosophy. Purdue has done such a great service in producing this new translation. From the physical heftiness of the book to the detailed footnotes, I’ve felt so connected to this set. It’s as though the arcane wisdom had just been waiting for the right translator to revive it to make it obtainable, on many levels, by a new generation, and Purdue was just the right person to do this. I highly recommend this translation above others, yes, even the free PDFs available online, because it feels alive with a potent spiritual energy. There is so much to learn from this new translation – sources to explore, wisdom to remember, and inspirations to be had.